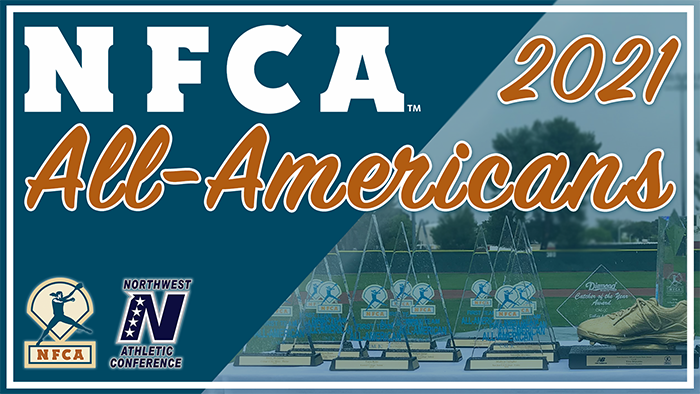 The quartet consisting of pitcher Esmeralda Banuelos, catcher McKenna Marshall, third baseman Brittany Bye and utility/pitcher Alyssa Smokey led SWOCC to a 30-4 overall record and 21-3 in the NWAC’s South Division. Banuelos was a conference-best 13-2 with 75 strikeouts and nine complete games in 91 innings of work. Marshall topped the Lakers and was ninth in the conference with a .525 batting average. Her 21 walks and .603 on-base percentage ranked fifth and sixth, respectively. Marshall also added 10 doubles, seven long balls and 45 RBI. Behind the dish, she recorded a .993 fielding percentage and threw out five of 10 runners attempting to steal.

NIC’s Taryn Vanderwiel, Taya Escalante and Kasey Davis keyed the Cardinals to the top of the East Division with a 23-4 overall record, 22-4 in divisional play. Vanderwiel earns the nod at third base. She hit .578 (63-for-109) with 12 doubles, 13 home runs and 55 RBI, while not striking out in 121 plate appearances. Vanderwiel topped the NWAC in hits, ranked second in batting average and long balls, and tied for second in RBI.

Joining Banuelos and Shopp as an All-America pitcher is Kaylie Hoskins from Everett Community College. Hoskins blistered the NWAC with 173 strikeouts, 89 more than the nearest competitor, in just 85 innings, averaging 14.25 punchouts per seven innings. Leading the Trojans to their first North Region title since 2007, she also posted a league-low 2.06 ERA, surrendered just three long balls, and finished 10-1with three shutouts and 11 double-digit strikeout games.

Earning honors at second base is the NWAC batting champion, Kinzey Williams from Lower Columbia College. Williams, keying the Red Devils to a 20-0 record in the South Division, topped the charts with a .622 batting average (46-for-74) and also led the league with a .641 on-base percentage. She scored a team-best 38 runs and swiped 10 bases.