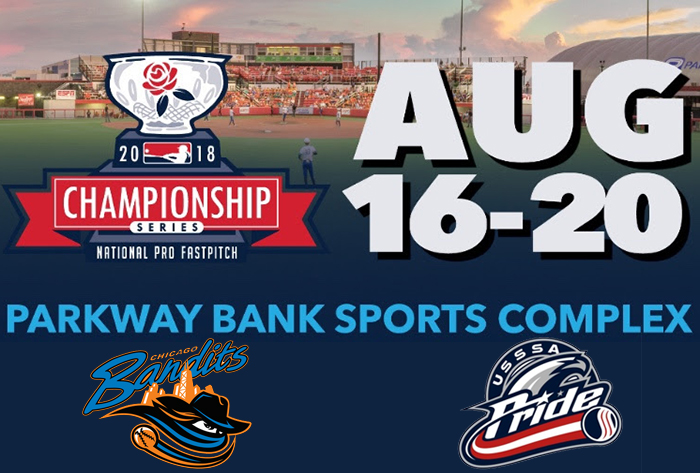 NASHVILLE, Tenn. – The National Pro Fastpitch League (NPF) Championship Series will begin on Thursday, August 16 at The Parkway Bank Sports Complex in Rosemont, Ill. This year’s Championship is a best-of-five series between the USSSA Pride and the Chicago Bandits, the top two finishers in the league, following a 120-game 2018 regular season schedule.

The two teams, steeped in professional softball historical success in the NPF, faced off 12 times this season with the Pride coming out on top with an 8-4 record. Making the Championship Series interesting is the fact that Chicago took two of three games in regular season series finale.

Every pitch of the 2018 Championship Series will be streamed live on ESPN+ with Eric Collins and Barb Jordan making the call. Additionally, ESPN+ will also carry a 30-minute pre-game show, hosted for the second year by Chuckie Kempf.

Fans can also follow along with Championship Series action on all social media platforms or “Live Stats” on profastpitch.com

Festivities open on Wednesday, Aug. 15 with the Championship Dinner, featuring the annual awards, including the Park Planet Player of the Year and the Rawlings Gold Glove Award will be announced.

The NPF will host a special fan experience, Championship Tailgate prior to each game. The Tailgate will begin three hours prior to first pitch and will feature prize giveaways, vendor booths, games, featured player autographs, and a live band.

For more information about the Championship Series, or to purchase tickets, please visit www.profastpitch.comor call the box office at 877-722-6348.