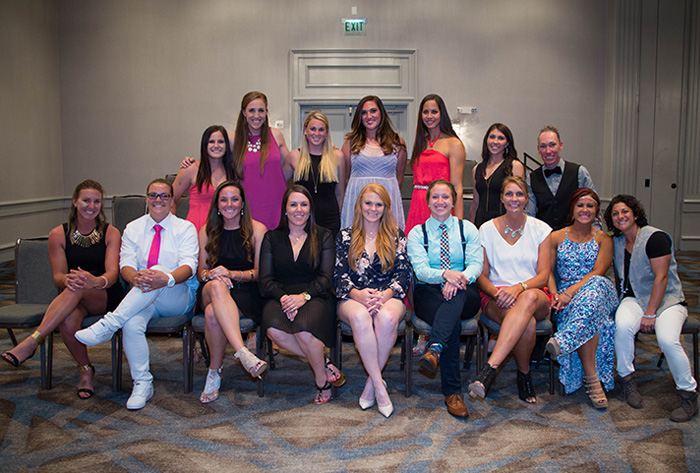 HOOVER, Ala, -- The 2015 NPF Awards Banquet took place at the Hyatt Regency Wynfrey Hotel on Thursday. The annual event is highlighted by the awards portion of the banquet, which recognizes outstanding player performances from the regular season.
The NPF Player of the Year presented by Mizuno went to veteran USSSA Pride outfielder, Kelly Kretschman. An every day starter in the outfield, Kretschman hit .338 with seven home runs and 22 RBI. She made just one error on the season and was a perfect 10 for 10 in stolen bases.
Chicago Bandits pitcher Monica Abbott took home the Pitcher of the Year Award, presented by Diamond Sports. Abbott went 13-1 with 11 shutouts, one save and 146 strikeouts. Abbott recorded 12 complete games, one no hitter and one perfect game, while allowing just four earned runs in 90.1 innings and no earned run since June 17.
Rookie of the Year presented by Easton Sports went to the Pride’s Shelby Pendley. Pendley led all rookies in slugging percentage, hits, home runs, OBP, RBIs, total bases, and runs, while ranking second among rookies in batting average and doubles. On the defensive side, Pendley registered a fielding percentage of .953.
Offensive Player of the Year presented by Louisville Slugger was awarded to the Bandits’ Brittany Cervantes. A unanimous choice in the voting, Cervantes hit .358 on the season and led the league in both slugging and on base percentage. In addition, Cervantes tallied 26 runs, nine home runs, 71 total bases, 30 walks and 23 RBI. Along the way, she maintained a 27 game reached base streak.
Defensive Player of the year presented by Wilson was won by outfielder Courtney Senas of the PA Rebellion. Senas racked a .964 fielding percentage with 49 putouts and four assists, the most by an outfielder. Over the course of the season, Senas only committed two errors.
The Home Run Award presented by Worth went to the league’s home run leader, outfielder, Taylor Schlopy of the Akron Racers with 10, while the Rally Spikes Award, presented by 3N2, went to Chicago’s Emily Allard, with 12 stolen bases.
Coaching Staff of the Year, presented by Bownet Sports went to the coaching staff of the Dallas Charge, head coach Jennifer McFalls and assistants Chez Sievers and Michelle Gromacki.  In their inaugural season, the Charge went 17-31 and qualified for the Championship Series, edging out the PA Rebellion in the final week of regular season action.
The Jennie Finch Award went to Cat Osterman of the USSSA Pride. Osterman is the sixth Finch Award winner, an award that was first given to Finch herself in 2010.
The All NPF Team presented by Combat, consists of 18 players in eight different categories which include one each of catcher, first base, second base, shortstop, and third base; four pitchers; three outfielders; and six at-large players. The 2015 All NPF Team:
Catcher: Taylor Edwards - Chicago
First Base: Kaitlyn Richardson - Dallas
Second Base: Shelby Pendley - USSSA
Shortstop: Jill Barrett - Akron
Third Base: Andrea Duran - USSSA
Outfield: Kelly Kretschman - USSSA
Outfield: Taylor Schlopy - Akron
Outfield: Natasha Watley - USSSA
Pitcher: Monica Abbott - Chicago
Pitcher: Cat Osterman - USSSA
Pitcher: Jordan Taylor - USSSA
Pitcher: Sarah Pauly - Akron
At Large: Brittany Cervantes - Chicago
At Large: Kelley Montalvo - Akron
At Large: Amber Patton - Chicago
At Large: Kristyn Sandberg - Pennsylvania
At Large: Megan Wiggins - USSSA
At Large: Tammy Williams - Chicago
The final award of the night, the NPF Trophy, was taken by the USSSA Pride for the second year in a row. The Pride had a record of 34-14 and won the regular season.
The NPF Awards banquet is an annual event held on the eve of the Championship Series. The Championship Series, held at the Hoover Metropolitan Stadium, kicks off Friday at 5:00 pm CTwith the #2 seed Chicago Bandits facing the #2 seed Akron Racers. That game will be followed by the match up of the #1 seed USSSA Pride taking on the #4 seed Dallas Charge at 8:00 pm CT. The Series is scheduled to conclude either Monday or Tuesday based on the outcome of the Final Series, which begins on Sunday at 2:00 pm CT.
Tickets may be purchased online at championship.profastpitch.com

or at the Hoover Met box office.
-- Courtesy of the NPF