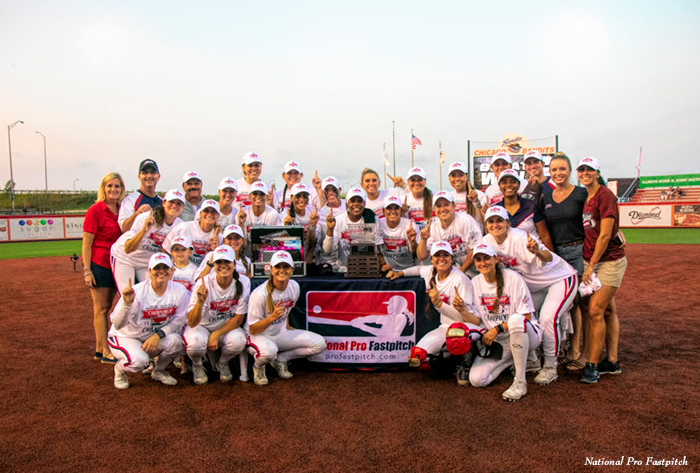 Second-year right-hander Jessica Burroughs led the way for the Pride helping them to a franchise-record 42-win season and the first Cowles Cup since 2014. Burroughs scattered four hits across 4.1 scoreless innings.

Sierra Romero broke a scoreless tie with a RBI single through the left side in the fourth off Bandits rookie right-hander Aleshia Ocasio. The Pride went on to plate two more runs in the frame to provide plenty of support for Burroughs. Southpaw Delaney Gourley and veteran right-hander Jolene Henderson secured the championship over the final 2.2 innings with a combined three strikeouts.

NPF Player of the Year Brenna Moss appeared to score the game’s first run off Burroughs in the opening frame when she tagged up to score on a sacrifice fly off the bat of Courtney Gano. However, after the Pride dugout launched an appeal, the umpiring crew declared Moss left the base early and took the run off the board.

The Bandits recorded just three hits after the first inning, two of which came from Moss, and could not string together enough baserunners to chip away at the deficit.

Moss’ two-out single in the seventh put the potential tying run in the on-deck circle for the Bandits, but Pride center fielder Allexis Bennett tracked down a liner to seal the title.

Meanwhile, the Bandits conclude another successful season, in which they recorded the second-most victories (37) in the franchise’s 14-year history.