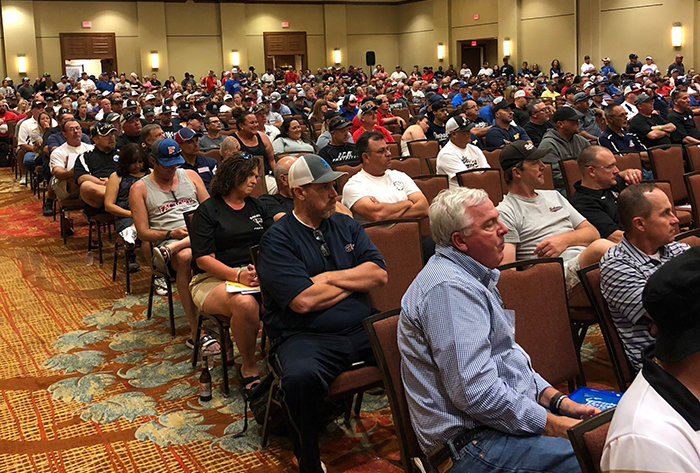 LOUISVILLE, Ky. - The NFCA engaged with approximately 2,000 travel ball coaches during the Triple Crown Sports (TCS) coaches meeting prior to the Sparkler and Fireworks tournament in Aurora, Colo.

“The travel ball community is very special to the NFCA,” said executive director Carol Bruggeman. “Coaches at the grass roots level have a great deal of influence on student-athletes and ultimately the growth of the game.  The NFCA is committed to serving travel ball coaches in their quest for excellence.  A special thank you to NFCA official sponsor Triple Crown for providing us the opportunity to visit with this valued group."

Grateful for their opportunity to meet and address the travel ball community, the NFCA values its partnership with TCS, whose main initiatives are education-based as shown by its title sponsorship of the NFCA’s Tip Tuesdays featured on YouTube.

Bruggeman challenged the coaches in attendance to educate themselves for the betterment of their student-athletes and ultimately, the game itself, while NFCA Travel Ball liaison Emily Allard emphasized that the association is only as good as the involvement of our members.

“A special thank you to Dave and Keri King, Elliott Finkelstein and Stephanie Klaviter for their generosity and support,” said Allard. “With their help, we were able to sit down with some of TCS’s staff and our members to brainstorm ways to continue educating travel ball coaches.”

Additionally, the NFCA’s presence allowed several coaches to join the association on-site. The association will head to two other major travel ball tournaments this summer as it works to continue growing the grassroots market.