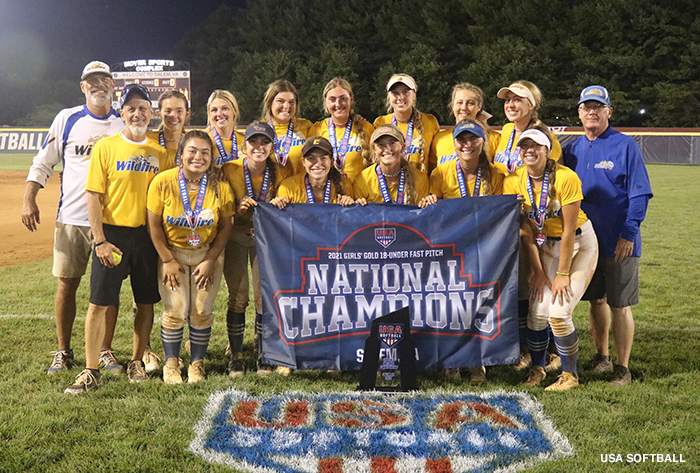 SALEM, Va. -- On the final day of the 2021 USA Softball GOLD Nationals, Finesse 16U Dreher / Lesko walked away with the trophy in the 16-Under division and Windermere Wildfire 18U – Paulson was crowned champion in the 18-Under division.

Highlighted by Brenna Farmer’s first-inning grand slam, Finesse 16U Dreher/ Lesko opened the title game with a five-run first and cruised to a 10-2 five-inning victory over Florida Gold John. Finesse recorded 11 hits and finished of the tournament with 62. Kelsey Nader accounted for 13 of those hits, posting a .565 batting average during the tournament. In the circle, Macy Irelan (Finesse 16U Dreher/ Lesko) picked up the win.

Finesse punched its ticket to the championship contest by knocking off Atlanta Vipers 04 Palazzo in a tightly-contested 3-2 game. Florida Gold John, which topped the Vipers 10-6 in the semifinals, needed to three victories on the final day to earn a trip to the title game.

18-Under Division:
Clawing its way out of the loser’s bracket, Windermere Wildfire 18U – Paulson put on an unbelievable show in the 18-Under bracket on the final day of the tournament. The Wildfire won five straight games on the final day to capture the 18U 2021 USA Softball GOLD National Championship title.

Windermere forced an in-necessary championship game with a 1-0 victory over Florida Storm-National Shepherd. A second-inning sac fly by Lexi Scalzo was all the offense Cat Buckner would need as she twirled a five-hit shutout. The winner-take-all contest witnessed the teams combine for 23 runs on 27 hits in a wild 12-11 victory for the Wildfire. In a back-and-forth affair, Scalzo’s clutch RBI double in a three-run sixth proved to be the difference. She finished with three hits and five RBI. Charli Warren led the Wildfire offense throughout the tournament topping the squad with 26 base knocks.