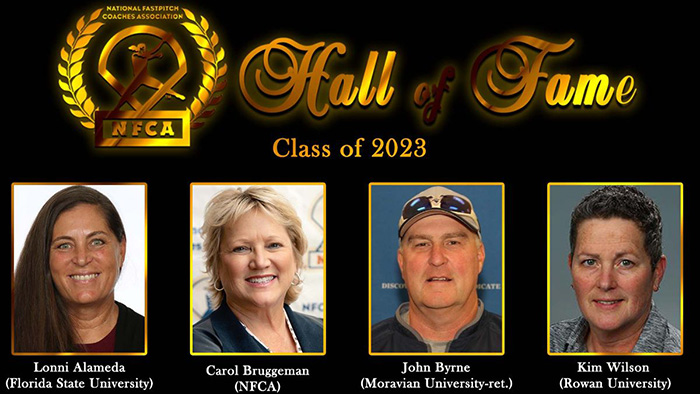 The quartet, which will bring the Hall’s total to 96 members, will be inducted on Friday, Dec. 8, 2023 in the Association’s hometown of Louisville, Ky. as the NFCA celebrates its 40th anniversary.

Alameda, who owns over 25 years of collegiate coaching experience, heads into her 15th season as Florida State’s head coach. She has guided the Seminoles to a 2018 National Championship and a national runner-up finish in 2021. Steering the ship of one of the nation’s top teams, Alameda’s resume at FSU includes four Women’s College World Series appearances, eight consecutive Super Regionals (2013-19, 2021), seven straight ACC regular season/division titles (2013-19) and eight ACC Tournament titles in a row.

The four-time Atlantic Coast Conference (ACC) Coach of the Year has steered FSU to 667 wins and owns a .778 winning percentage over 14 seasons. FSU has won at least 40 games in all but one full season under Alameda, which includes the 50-win plateau in 2014, 2016, 2018, 2019 and 2022. Along with her time as UNLV’s head coach, Alameda has directed her programs to 824 victories with that milestone (800th) coming on March 26, 2022 against FIU. Prior to FSU, she directed UNLV to 157 wins and a 2005 NCAA Regional appearance and was named Mountain West Conference Coach of the Year twice. Alameda also spent time as an assistant coach at Stanford and Barry University, while also serving internationally as Canada’s assistant coach and as an instructor for the Aruban and Spanish national teams. Additionally, during the summer of 2016 and 2017, Alameda coached the USSSA Pride of the National Pro Fastpitch league. The Pride posted the best record in the league in both seasons.

Since taking the role as interim NFCA Executive Director in September 2015, Bruggeman, who became the permanent director in 2016, has overseen tremendous growth in the organization. Membership has grown 63 percent, sponsorship revenue has increased 433 percent, and events have increased in both the number offered and overall attendees during Bruggeman’s tenure. Recognized as one of Louisville Business First’s 2022 Most Admired CEOs, Bruggeman's leadership was critical during COVID. While shepherding the Association through a challenging pandemic, she maintained a full-time staff and continued business relationships with all sponsors and partners. After dipping below 3,500 members during COVID, the Association set a record high for overall membership in November 2022 and currently stands at over 6,500.

Bruggeman is certainly no stranger to the Association, having been an active member for 25 years while serving the NFCA in numerous capacities. She had a four-year term as Board President and stints as both the Past-President and Fourth Vice President, in addition to time spent as Division I Representative. Prior to her employment with the Association, Bruggeman also enjoyed a successful coaching career. Serving as Purdue’s founding head coach (1994-2005) as well as an assistant at Michigan and associate head coach at Louisville, Bruggeman earned over 700 career victories, and has had a hand in 11 NCAA Regional appearances, seven conference titles and coached 11 NFCA All-Americans, 56 All-Region honorees and 113 all-conference winners, along with 12 Players, Pitchers, Freshmen and Scholar-Athletes of the Year. Additionally, Bruggeman serves as a college analyst on the ESPN, SEC, and ACC television networks during the college softball season.

Former Moravian head coach Byrne retired in May of 2022 after 29 years leading the Greyhound softball program and 44 years at the school. Upon retiring from his alma mater, Byrne was the fifth active and ninth overall NCAA Division III coach to reach 900 career victories, surpassing the milestone on March 2 with a 2-1 win over No. 11 Milwaukee School of Engineering. He completed his career with a 923-257 overall record, a .782 winning percentage that ranks as the eighth best in NCAA Division III history.

Wilson, one of the winningest all-time coaches in NCAA Division III softball, has won 901 contests in 32 seasons as a Division III head coach. In 26 seasons as Rowan's head coach, Wilson has compiled an 836-238-2 record, while leading the Profs to eight NJAC Championships and 18 NCAA Tournament appearances, including a third-place national finish. Wilson's overall record in 32 years of coaching, which includes six seasons at Washington & Jefferson College, is 901-340-2. At the start of the 2022 season, she ranked sixth in all-time wins and 16th in winning percentage among active Division III coaches.

Rowan's 18 NCAA Regional appearances under Wilson include four trips to the NCAA Super Regional, including back-to-back berths in 2018 and 2019, while the 2018 squad captured the title to advance to the NCAA Championship. The Profs also reached the Super Regional in 2014 and 2016. Wilson's Profs added to the tradition in 2022 when Rowan captured the NJAC Championship and made another trip to the NCAA Tournament while posting an overall record of 35-10. She was named the NJAC Co-Coach of the Year, earning her eighth conference coaching award as she guided the Profs to the regular-season title with a 15-3 league record.

For more information on the NFCA Hall of Fame and how to nominate click HERE.

The NFCA (National Fastpitch Coaches Association) is the professional organization for fastpitch softball coaches. Known for its prestigeous Hall of Fame, the NFCA also educates and supports softball coaches on a variety of different levels: from podcasts to awards, to in-person events and National Convention.