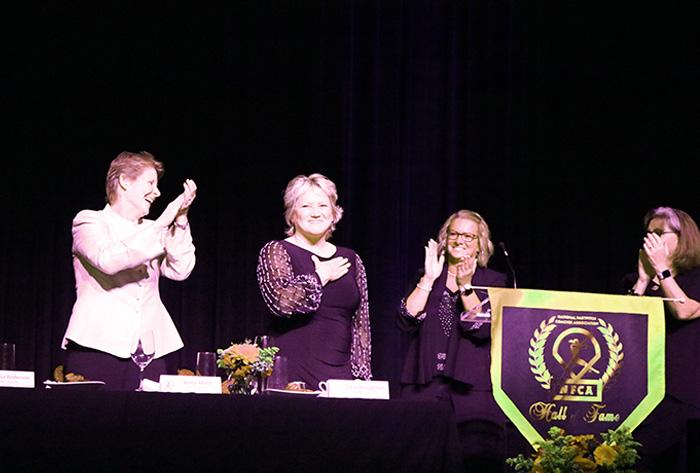 Since taking the role as interim Executive Director in September 2015, Bruggeman has overseen a tremendous growth in the organization. Membership has grown 63 percent, sponsorship revenue has increased 433 percent, and events have increased in both the number offered and overall attendees during Bruggeman’s tenure. Part of the increase is due in part to the joint membership initiatives with the NJCAA, California Community College Fastpitch Coaches Association, and various state High School Associations as well as a grassroots pilot program.

She was recently recognized as one of Louisville Business First’s 2022 Most Admired CEOs and honored during a reception and dinner at the Galt House Hotel in Louisville. The award recognizes CEOs who are innovators, standard-bearers, role models and exceptional leaders. Their contributions impact the company they head as well as the community in which they serve. A commitment to financial success, quality, workplace wellness, diversity and philanthropy are hallmarks of an exceptional and admired chief executive.

Bruggeman's leadership was critical during COVID. While shepherding the Association through a challenging pandemic, she maintained a full-time staff and continued business relationships with all sponsors and partners. After dipping below 3,500 members during COVID, the Association set a record high for overall membership in October 2022 and currently stands at over 6,500. She also led the charge in bringing back and executing a thriving in-person annual Convention in December 2021 in Las Vegas with over 1,500 attendees and 138 companies in the Exhibit Show.

In addition to the membership regrowth after COVID, the NFCA had to shift its focus following the cancellation of the 2020 softball season. Weekly virtual educational offerings (coaches clinics, webinars and mentoring sessions) were added to the docket, while also giving back to the membership with the implementation of "Building Champions: A Week of Giveaways." This initiative, during what would have been the 2020 WCWS, rewarded member coaches with prizes such as membership extensions, Convention registration and NFCC course registration, along with the grand prize of two 2021 WCWS Championship Series tickets.

Bruggeman has presided over three of the highest attended National Conventions and was pivotal in the acquisition of the National Softball Coaches Clinics in 2017. She introduced a legal counsel as a member benefit, Coaching Tools education for Grassroots members, a year-round coach mentoring program, an expanded coach and student-athlete awards program, and increased scholarship opportunities.

She spearheaded the Implementation of the prestigious Rawlings Gold Glove awards for the sport of softball in 2022. That program, which had long been known as a baseball-only award, debuted in NCAA Division I softball last year and will expand to all NFCA college divisions this coming spring.

She was recognized by her alma mater, the University of Iowa, with her selection as the 2020 recipient of the Dr. Michael Teague All-Star Award, which salutes significant contributions to the program and achievements in the sport and recreation industry.

Also in 2020, Bruggeman was the featured softball clinician at the Italian Baseball Softball Federation (FIBS) National Coaching Convention in Rimini, Italy. She spoke once to the leadership track and led sessions on practices, defending the short game, middle infield defense, outfield defense, slapping and hitting.

In July 2011, Bruggeman traveled to Australia as head coach of the college team that won a gold medal with USA-Athletes International, and traveled to the Czech Republic in 2009 in the same role.

During her time as Executive Director, the NFCA has successfully campaigned on behalf of its coaches to eliminate early recruiting practices in Division I college softball, which the NCAA adopted in April 2018, and that same year oversaw the first major revamp of the NFCA’s bylaws since they were initially adopted in 1983. In 2019, the Association unveiled its Diamond of Ethics, which stresses four key principles — Commitment, Integrity, Respect, and Professionalism — which serve as the foundational ethical bases of the NFCA.

Bruggeman also took steps to protect the Association’s brand, by trademarking the NFCA name and logo, as well as the NFCC abbreviation for its series of National Fastpitch Coaches College classes.

Significant improvements have also been made to the NFCA’s Louisville headquarters, ranging from upgraded technology, to new carpeting, furniture and windows, to new graphics throughout the building. Bruggeman has grown the Association staff to 11 full-time team members, one part-time team member, and several outside contracted employees.

Bruggeman joined the NFCA full-time as Associate Executive Director in September 2014, after a long career and over 700 victories as an NCAA Division I coach at Michigan, Purdue and Louisville.

On the Louisville staff, Bruggeman helped guide the Cardinals to nine NCAA regionals and set school records for wins twice — in 2009 (48) and 2012 (55). Louisville averaged 42 wins per year and won the Big East regular-season crown in 2006 and 2012, captured the Big East tournament in 2007, was the Big East tournament runner-up in 2010 and 2011, and won the American Athletic Conference tournament in 2014. Seven of those years, the team ranked in the top 25, once each ranked in the top 20 and top 15, and was ranked in the top 10 in 2012 and 2013. Sixty-seven players on her watch earned Big East All-Conference honors, 20 collected NFCA All-Region recognition and eight were named NFCA All-Americans. Two Cardinals were named Big East Player of the Year, one was chosen Big East Pitcher of the Year and one was the Big East Scholar-Athlete Award honoree. Two players were selected as Lowe's Senior Class Award finalists, one was chosen for the USA Softball national team camp and six went on to play professionally. Bruggeman earned her 400, 500, 600 and 700-win milestones at Louisville.

At Purdue, Bruggeman won 21 games in 1994, the team's inaugural season, and she collected her 100, 200 and 300-win milestones while the Boilermakers' head coach and averaged 32 wins per season. Twenty-three players earned All-Big Ten selection, 24 were named NFCA All-Region and one was a first team NFCA All-American. She mentored 71 Academic All-Big Ten players, seven Academic All-District selections and four Academic All-Americans. One was chosen for an NCAA post-graduate scholarship and every player who competed all four years earned her degree. Three players went on to play professionally, three were chosen for the USA Softball national team camp, two attended the NCAA Leadership Conference. Purdue was ranked in the top 10 of the NCAA Mideast Regional rankings from 1996-2005.

During her time on the Wolverines' staff, Michigan averaged 38 wins per year and went to the 1992 and 1993 NCAA Regionals after capturing the Big Ten title both those seasons. Twenty-three players were named to the All-Big Ten team, 12 earned NFCA All-Region and two were NFCA All-Americans. Twelve garnered Academic All-Big Ten honors, while three were Academic All-District and one was an Academic All-American. Three each were selected Big Ten Player of the Year and Big Ten Freshman of the Year, and two earned Big Ten Pitcher of the Year during her tenure.

Bruggeman is also a well-respected national speaker, clinician, educator, television analyst and author. She continues to speak and teach, and remains a fixture on the ESPN, SEC, ACC, and Big Ten television networks during the college softball season.

She had a four-year term as NFCA Board President and stints as both the Past-President and Fourth Vice President, in addition to time spent as Division I Board Representative.

As an infielder at the University of Iowa, Bruggeman was an All-Big Ten and All-Mideast Region selection, as well as an Academic All-American and a three-time Academic All-Big Ten honoree, who received Iowa’s Athletic Academic Medal of Honor. In 1997, she was inducted into the Iowa Softball Association Hall of Fame.

A native of Charter Oak, Iowa, she received her bachelor’s degree in accounting and business from Iowa in 1987 and continued her education at Iowa, earning a master’s in athletic administration and coaching in 1990.