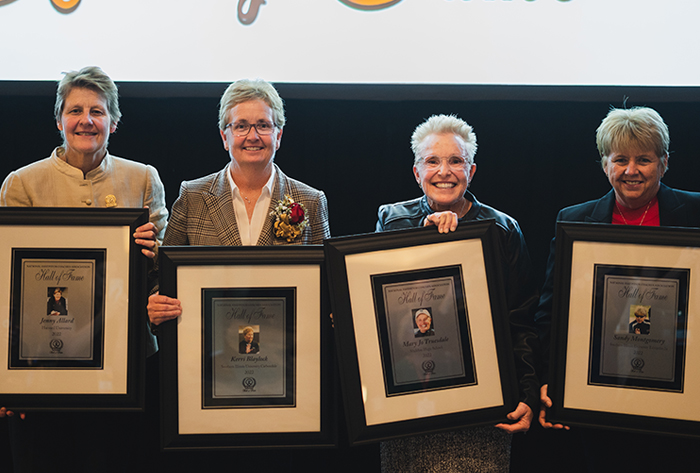 The NFCA Convention’s marquee event, preceded by a 30-minute social reception, the banquet kicked off by honoring Hall of Famers in attendance with the NFCA’s traditional Hall of Fame March.

For complete bio check out our Hall of Fame page HERE.

Allard is the Ivy League’s longest-tenured and winningest softball coach, collecting 659 victories, 327 in Ivy League play.  All eight of Harvard’s Ivy League titles and its seven NCAA Championship berths have come under the watch of Allard, who has led Harvard softball for more than half (28 seasons) of the program’s existence. Allard’s teams have produced 72 first-team, 69 second-team and 46 honorable mention all-Ivy selections, as well as seven Ivy League Players of the Year, eight Ivy Pitchers of the Year, six Ivy Rookies of the Year and three NFCA All-Americans.

Blaylock, who retired on March 2, 2022, is the all-time winningest coach in both Southern Illinois softball and Saluki Athletics history. During her storied tenure, SIU advanced to the NCAA postseason eight times, which includes being the only program in conference history to make five-straight trips from 2003-07. Southern won the 2021 Missouri Valley Conference Tournament title after it defeated Northern Iowa, 2-0, in the MVC Championship game to earn SIU’s third appearance to an NCAA Regional in the last five seasons.

Montgomery enjoyed an illustrious 30-year career at the helm of SIUE softball. The longest-tenured Cougars head coach and one of the most successful, Montgomery retired in 2018 with a 1,051-540-2 record. She led SIUE to a 2007 NCAA Division II national title, 12 NCAA Tournament appearances, six conference championships and 10 40-plus win seasons. During her career, she coached 11 All-Americans and 79 All-Conference selections.

A legendary pillar of high school softball, Truesdale has spent over 45 years as a head coach in the state of California, the last 26 at the helm of Sheldon High School (Sacramento, Calif.) A 2020 National Federation of State High School Associations’ (NFHS) national coach of the year, Truesdale has coached in over 1,000 games with her teams generating over 800 wins and numerous league and section titles. The only head coach in program history, Truesdale has built a long-standing tradition at Sheldon, starting the program in 1997 after a successful career at Elk Grove (Calif.) High School. Just this past season, her program tied a section record with its ninth Sac-Joaquin section title.

The NFCA (National Fastpitch Coaches Association) is the professional organization for fastpitch softball coaches. Known for its prestigeous Hall of Fame, the NFCA also educates and supports softball coaches on a variety of different levels: from podcasts to awards, to in-person events and National Convention.