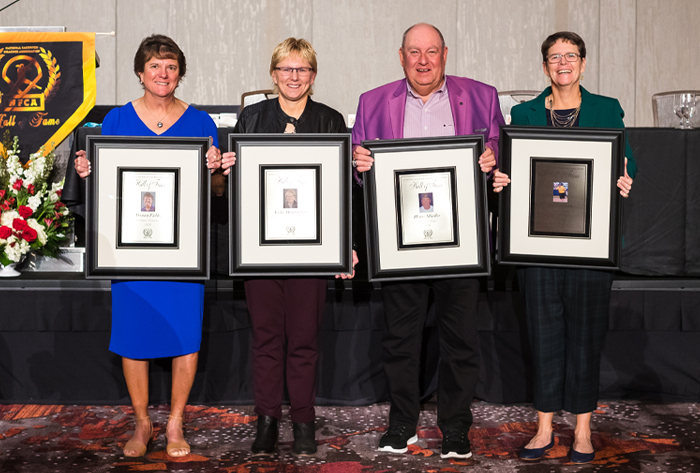 At the NFCA Convention’s marquee event, the Association honored two classes, 2020 and 2021, in a combined ceremony due to the cancellation of the 2020 in-person Convention. Representing the 2020 class were Fields, Herman and Mueller, while Higgins and Huntington joined as the Class of 2021.

Preceded by a 30-minute social reception, the banquet kicked off by honoring Hall of Famers in attendance with the NFCA’s traditional Hall of Fame March.

Fields is the only Rattler in school history with a national championship as a player and coach. The 12-time Heartland Coach of the Year guided St. Mary’s to a 2002 NCAA Division II national title, seeing the Rattlers collect a program-record 58 wins and finish atop the final NFCA Division II Coaches Poll.  In 23 seasons at the helm, Fields has steered the Rattlers to 949 victories, 18 conference titles, 15 NCAA Regionals, three Super Regionals and four NCAA Division II National Championship berths, reaching the final eight in 2002, 2003, 2005 and 2015.

Herman has been an instrumental figure in collegiate softball since beginning her coaching career in 1988. Over the course of her tenure, Herman’s squads have collected 767 victories and 11 New England Small College Athletic Conference (NESCAC) titles. In 2018, she became the 17th coach at the NCAA Division III level to surpass 700 wins and is currently 12th on the active victories list. Herman has guided Williams College to four NCAA Division III National Championship appearances, four NESCAC West Division titles, six NESCAC championships and eight trips the NCAA Division III Tournament. Overall, she has steered the Ephs to 428 victories and six league championships.

Mueller is one of the most accomplished coaches in the National Junior College Athletic Association (NJCAA). A nine-time NJCAA National Championship Coach of Year, Mueller has guided Phoenix College to nine NJCAA Division II national titles over the last 22 seasons, including the 2021 squad which went wire-to-wire as the No. 1 team in NJCAA DII, winning its final 42 games. Along with the nine national titles, Mueller has steered the Bears to 1,464 victories, four national runner-up finishes, 18 Region 1 titles and eight Arizona Community College Athletic Conference championships.

Higgins, the first Division I chair of the NCAA Softball Committee, started women’s athletics while still a student at Creighton in 1973, and later served as both softball coach and women’s athletic director, before moving to the academic side of the school during a 39-year career. She was the first woman inducted into the Creighton Athletic Hall of Fame in 1987, having coached the softball team to a 564-298 record and two Association for Intercollegiate Athletics for Women (AIAW) World Series and two NCAA Women’s College World Series over 17 years at the helm.

Huntington, who is set to coach her 21st season at Wisconsin-Eau Claire, guided the Blugolds to the NCAA Division III championship in 2008, after a third-place national finish the previous spring. Earning her 500th career win in 2021, Huntington has compiled a 521-278-2 record over the past 20 seasons. The four-time Wisconsin Intercollegiate Athletic Conference Coach of the Year (WIAC) has mentored eight NFCA All-Americans, 43 NFCA All-Region selections, 51 All-WIAC first teamers, nine CoSIDA Academic All-District honorees and one CoSIDA Academic All-American.

In addition to the five new members that joined the NFCA Hall of Fame on day three of the 2021 NFCA Convention at Caesar’s Forum. here was a full lineup of speakers, the Softball Summit presented by USA Softball, brand-new education and giveaways in the Exhibit Hall.

At the Summit, softball dignitaries- USA Softball’s Chris Sebren and USA Baseball’s Jenny Dalton-Hill provided overviews for the those in attendance. The NFCA recognized the USA Softball coaching staff with a special coaching staff of the year award. Additionally, NCAA Secretary-Rules Editor Vickie Van Kleeck went over rule interpretations and updates, and each respective group representative on the Association’s Board of Directors provided insights into what they are working on for the betterment of game both on and off the field.

The record-setting Exhibit Show (138 companies) closed on Friday, which included a pair of giveaways by NFCA Official Sponsors. One lucky attendee went home with a Sports Attack Junior Hack pitching machine, while another scored a batting cage, used for the exhibit show and NFCA education, along with its contents from Netting Professionals. Going home with the Junior Hack Attack was Upper Iowa assistant coach Kelsey Aikey, while Piedra Vista High School (N.M.) assistant coach Bryan Chavez.

NFCA Official Sponsor HitTrax brought back its virtual Home Run Derby for a third time, but with a twist. The HitTrax & The Natasha Watley Foundation Present: Home Run Derby with the Pros (and Coaches) where six Pro and Olympic athletes competed. The newly-added format allowed the athletes to select a favorite coach to compete with them, creating a powerful home run hitting team. Coming away victorious in 2021 was two-time NFCA All-American and 2020 Olympian Erika Piancastelli.

Along with the Hall of Fame reception and banquet that capped the evening, NFCA High School and Travel Ball coaches were treated to a social hour presented by Fundraising University.