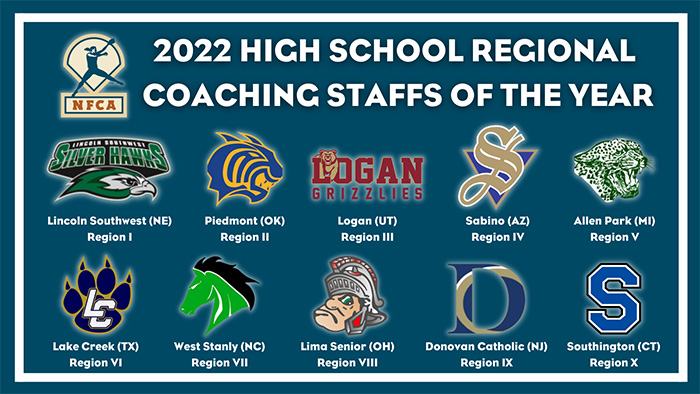 LOUISVILLE, Ky. – Ten high school programs were selected by their peers as a 2022 NFCA Regional Coaching Staff of the Year, the Association announced on Thursday afternoon.

Captured the Oklahoma 5A state championship, its second in the last three years … Posted a 35-7 record, while also earning the 5A Regional and 5A-2 District titles … Won a pair of in-season tournaments (Shawnee Invitational & Veteran Bat Invitational) … Consistently ranked in the NFCA Fall High School Coaches Poll, finished 2021 at No. 12.

With the addition of 11 new players, who never played softball, as well as eight returnees, Logan improved on their win total from a season ago … Recognized as a staff who not only taught the players the skill to succeed on the field, but were impactful in their lives off the field and in the classroom.

Steered Sabino to its third straight AIA Conference 3A state championship … Posted a 32-3 record and owned a 27-game win streak in 2022 … Captured the AIA Outstanding Sportsmanship Award … Posted three shutouts and outscored the opposition 44-7 during a 4-0 state playoff run to the title.

Captured its first MHSAA state championship in program history … Posted a 5-0 mark in the state tournament, capping it off with a 5-0 victory over Dakota High School … Ranked No. 1 or No. 2 in the state of Michigan throughout the season … Posted a 41-4-1 mark, winning the final 13 games of the season.

Undefeated run to a Texas 5A state championship … Posted a perfect 41-0 record … No. 1 team in the final USA Today/NFCA High School Super 25 Poll, holding the No. 1 spot since the third poll of the season … Named 2021-22 USA Today High School Sports Awards Girls Team of the Year.

First-year coaching staff guided West Stanly to third straight NCHSAA 2A state championship (team graduated six seniors, and returned just three starters) … After a 5-3 start, the team won 24 of its final 25 contests, including a 6-0 mark in the state tournament … Under the tutelage of Smith, junior Lily Huneycutt, who had never thrown a varsity pitch, posted a 27-3 record, with a 1.51 ERA and 251 strikeouts.

Working with limited resources in an urban environment, the staff has guided Lima to more wins in one year than they have had in a decade combined … The program has seen vast improvements, earned its first NFCA All-Region honor in 2022 and had numerous Easton/NFCA All-America Scholar Athletes … Robert Nelson was voted Three Rivers Athletic Conference Coach of the Year … They are recognized as coaches who make a difference, look beyond the wins and losses and have a positive influence on kids lives and long-term outlooks.

Captured the CIAC Class LL state championship (No. 2 overall seed) … A 5-0 state tournament run earned the 20th state title, the most amongst high school softball programs, breaking a three-way tie with high school in New Hampshire and North Carolina … It marked the sixth title for head coach Davina Hernandez … Hernandez’s staff carried a big load in 2022 as Hernandez is battling Lupus and a kidney disease … Posted a 27-1 mark with its only defeat coming at the hands of Class L state champion Masuk.