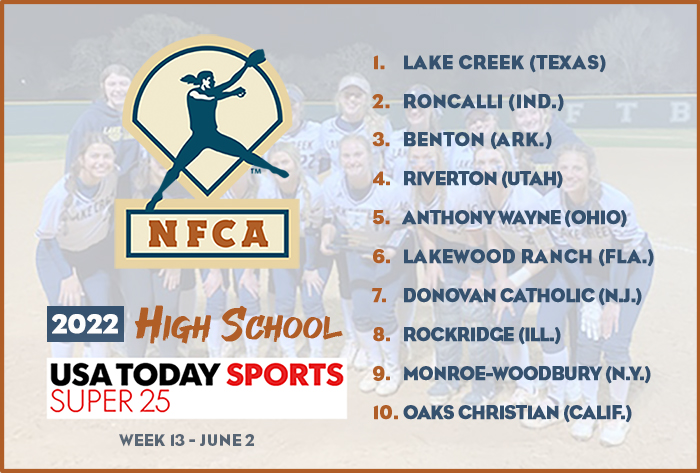 The (39-0) Lions closed out their best-of-three series with Santa Fe with a 7-2 victory last Thursday and advanced to Friday’s Texas Class 5A final four matchup with Rock Hill. The winner will play either Aledo or Georgetown in Saturday’s state championship.

Meanwhile, the rest of the top eight remained unchanged. No. 2 Roncalli (30-0) plays Pendleton Heights on Saturday for a berth in the Indiana state 4A semis later that night, while fourth-ranked Riverton (28-1) defeated West, 14-0 and 11-1, in the best-of-three championship series to win its second straight Utah Class 6A crown.

Sixth-ranked Lakewood Ranch (30-2) defeated Lake Brantley, who had dealt the Mustangs their only two losses of the season in March, 8-2, in last Saturday’s Florida state 7A final. Afterward, the coaching staff had more softball on their minds, as T.J. Goelz and wife Liz hopped on a plane to Blacksburg, Va., to see daughter Avery, a sophomore at the University of Florida, go 2-for-2 with three RBI to help the Gators advance to the NCAA Women’s College World Series. Another daughter, Kinsey, is a redshirt senior for Florida.

New York’s Monroe-Woodbury (23-0) was this week’s big mover, going from 17th to ninth on the strength of a 12-0 state Class AA subregional rout of North Rockland that extended the Crusaders’ perfect season.

No. 14 Watkins Memorial (28-2) is the lone newcomer to the Super 25. The Warriors play an Ohio Division I final four game against Springfield later today for the right to possibly face No. 25 Lakota West (27-3) in the state final.