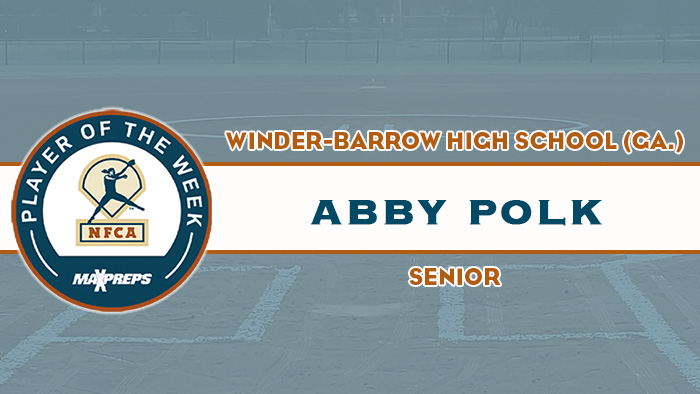 LOUISVILLE, Ky. –  Abby Polk of Winder (Ga.)-Barrow High School was named 2022 MaxPreps/NFCA Fall High School Player of the Week. Polk is being recognized for her outstanding performance during the week of Oct. 10-16.

Polk keyed the Bulldoggs to three victories last week, hitting .800 and driving in 14 runs, eight of which came in a thumping of Clarke Central. The senior shortstop went 4-for-4 in that contest with a triple, home run and four runs scored. Polk also homered and registered four RBI in an 8-0 shutout of Heritage. She capped off the week with a double, triple, two RBI and two runs scored against Jefferson. For the week, Polk was 8-for-10 (.800) with a double, two triples, two long balls and eight runs scored. She slugged 1.900 and reached base at a .846 clip.