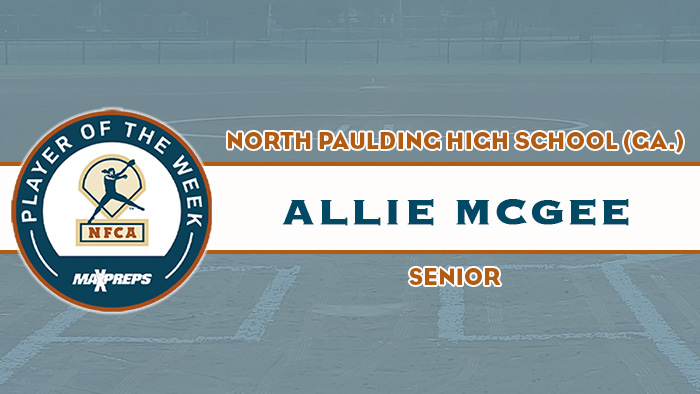 LOUISVILLE, Ky. –  Allie McGee of North Paulding High School (Dallas, Ga.) was named 2022 MaxPreps/NFCA Fall High School Player of the Week. McGee is being recognized for her outstanding performance during the week of Oct. 17-23.

McGee launched three home runs and was a perfect 5-for-5 at the plate in keying North Paulding to a pair of Georgia High School Association (GHSA) Class AAAAAAA state playoff wins. The senior connected on two home runs, recorded three RBI and scored twice in a 10-0 victory over Archer. McGee (2-2, 2 BB, R)  left the yard against Campbell as well, driving in another three runs in a 5-1 victory that secured the Wolfpack’s spot in the state quarterfinals, Oct. 26-29 in Columbus, Ga. She reached base in all seven plate appearances, did not strike out and slugged, 2.800.