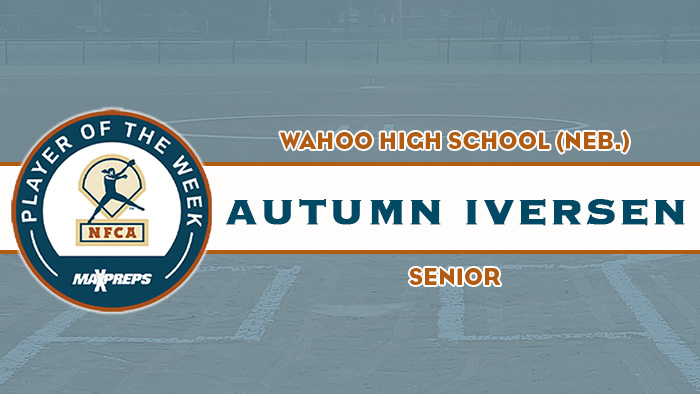 LOUISVILLE, Ky. –  Wahoo (Neb.) High School’s Autumn Iversen was named 2022 MaxPreps/NFCA Fall High School Player of the Week. Iversen is being recognized for her outstanding performance during the week of Sept. 26-Oct. 2.

Iversen launched six home runs and was nearly perfect at the plate (10-for-11) as she powered the Warriors to three wins last week. She added a triple, nine RBI and 11 runs scored, walked twice, posted a .923 OBP and slugged an eye-popping 2.727. Iversen homered in all three of her at bats versus Arlington (4 RBI, 4 runs). She left the yard twice, drove in two and scored three times in an 8-6 triumph over Norris. The senior capped off the week with a 5-for-5 outing, falling a double short of the cycle against Gross Catholic in which Iversen registered a triple, homer, three RBI and four runs scored. Additionally, Iversen struck out 18 and allowed two earned runs and five hits over nine innings of work.