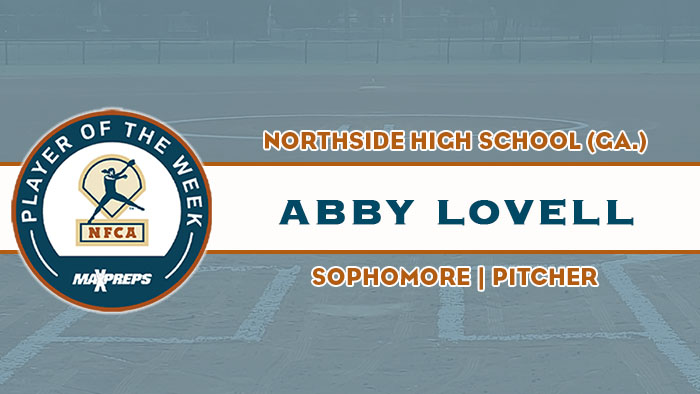 LOUISVILLE, Ky. –  Abby Lovell of Northside High School (Columbus, Ga.) was named 2022 MaxPreps/NFCA Fall High School Player of the Week. Lovell is being recognized for her outstanding performance during the week of Oct. 24-30.

Lovell twirled three shutouts and struck out 25 batters, keying Northside to a Georgia High School Association (GHSA) 5A state championship. The sophomore hurler scattered 11 hits and allowed just one earned run over 25 innings of work. Lovell fanned a week-best nine in a semifinal win over Harris County. She followed that with a three-hit shutout of top-ranked Loganville, securing the Patriots’ second state title. In the second round of the tournament, an 8-4 triumph over Loganville, Lovell fanned eight, walked two and allowed just three hits, while also contributing at the plate with a double and RBI.