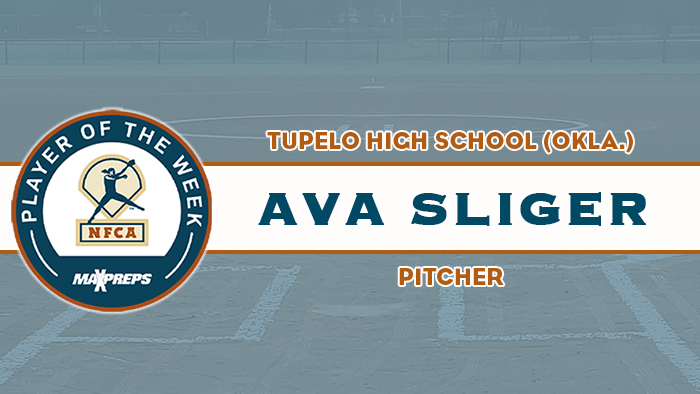 LOUISVILLE, Ky. –  Tupelo High School’s (Okla.) Ava Sliger was named 2022 MaxPreps/NFCA Fall High School Player of the Week. Sliger is being recognized for her outstanding performance during the week of Aug. 22-28.

Sliger was dominant in three starts last week, twirling a no-hitter and posting a 3-0 record with a 0.00 ERA and 30 strikeouts over 18 innings of work. She scattered seven hits, did not walk a batter and held her opponents to a .111 batting average. Sliger fanned 15 and faced one batter over the minimum as she held Maud hitless in a 2-0 victory.  She also tossed a five-hit shutout with six strikeouts in a 3-0 triumph against Ada. In her other appearance, Sliger struck out nine and surrendered two hits in four innings versus Asher.

The NFCA (National Fastpitch Coaches Association) is the professional organization for fastpitch softball coaches. Known for its highly-regarded high school and collegiate weekly player & pitcher of the week awards, the NFCA also educates and supports softball coaches on a variety of different levels: from podcasts to awards, to in-person events and National Convention.