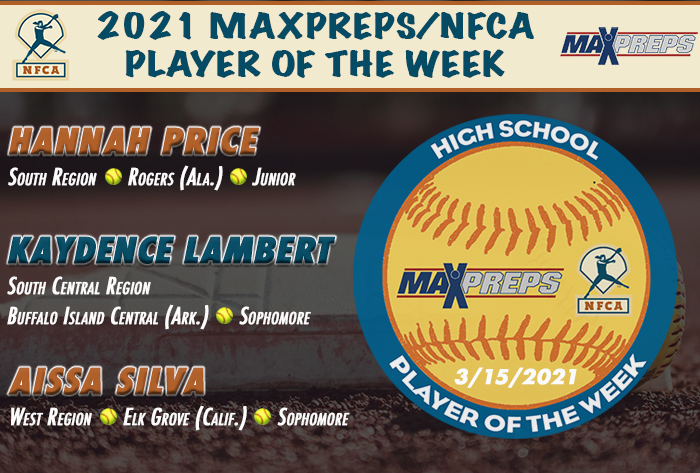 Price was dominant in five appearances, tossing two no-hitters and not allowing a run with 59 strikeouts over 24 innings of work. The junior hurler scattered six hits, walked two and held her opposition a .075 batting average. Price no-hit Haleyville (17 K, 0 BB) and Lauderdale County (14 K, 0 BB, 6 IP), while also fanning 11 and 10 batters, respectively in four-inning stints versus Danville and Russelville.

Lambert keyed the Mustangs to a 2-0 week by going 8-for-9 at the plate with a double, home run, 10 RBI and five runs scored. She posted a 1.333 slugging percentage, swiped five bases and was perfect in the field, recording 14 putouts. Against Cross County, Lambert was a perfect 4-for-4, recording a double, long ball and six RBI. She registered four hits, four RBI and three runs scored in a win over Marked Tree.

Silva was lights out in the circle, leading the Thundering Herd to a pair of season-opening wins. The sophomore southpaw twirled a pair of complete-game shutouts, allowing just three hits (.087 opp. batting average), striking out 29 and walking just one. Silva held Del Oro to just two hits and fanned 17 in a 2-0 victory. She followed that with a one-hit blanking of Granite Bay on March 12 in which she sat down 12 Grizzlies in a 5-0 victory.