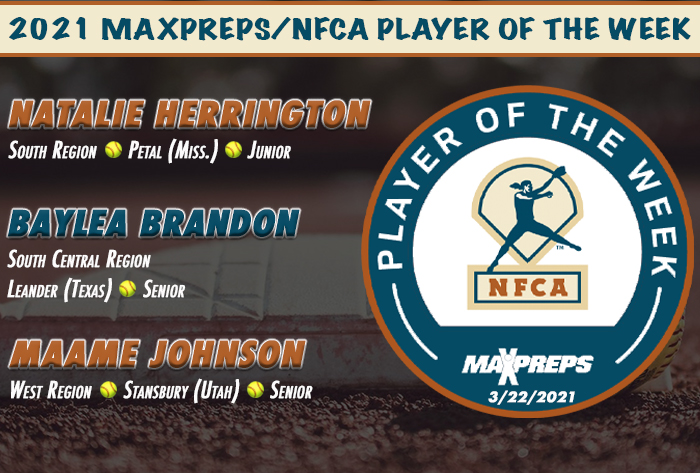 Herrington twirled a pair of no-hitters and struck out 31, lifting Petal to a pair of victories last week. The freshman hurler fanned 19 and walked just one in a 6-0 triumph over Greene County. One day later, Herrington allowed an unearned run, sat down 12 and did not issue a free pass against Poplarville. She also went 2-for-3 in each contest with a double in the first game and an RBI in game two.

Brandon hit .750 (9-for-12), launched four home runs, scored nine runs (three times each game) and drove in nine. She added a triple and slugged 1.916. Against East View, Brandon left the yard twice and recorded three RBI in a 6-5 victory. The senior outfielder also homered against Liberty Hill and Cedar Park, driving in four runs versus the latter Timberwolves.

Johnson was 10-for-11 at the plate and reached base safely in 11-of-12 plate appearances. She drove in eight runs, scored 10 times and slugged 1.909 with three doubles, a triple and two home runs. Both longballs came against Ogden in which Johnson was 4-for-4 with four RBI and four runs scored. The senior outfielder added a double, triple, three RBI and three runs scored versus Hunter. Johnson tallied three more runs and doubled in a 13-3 win over West Jordan.