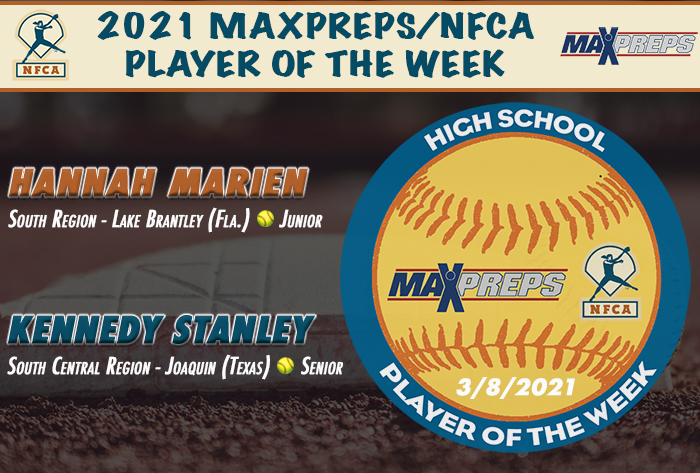 Marien was unhittable in a pair of wins for the Patriots last week. The junior hurler tossed two no-hitters with 28 strikeouts and five walks in 13 innings of work. Marien was also 3-for-6 at the plate with a double, two RBI and three runs scored. On March 1 against Seminole, she fanned 13 in a 13-0 six-inning victory. Three days later, Marien continued her dominance by sitting down 15 Montverde Academy batters in a 3-0 triumph.

Stanley hit .857 (12-for-14) with four doubles, a triple, home run, 14 RBI and 12 runs scored, keying the Rams to a 5-0 week. She was a double short of the cycle with a long ball, triple, five RBI and three runs scored against Rusk. She followed that performance by going 2-for-2 with a double, four RBI and three more runs versus Pewitt. Stanley drove in three runs against Texas High School and registered two doubles versus Hooks. The senior infielder, who did not strike out in 18 plate appearances, slugged 1.500 and owned a .778 on-base percentage.