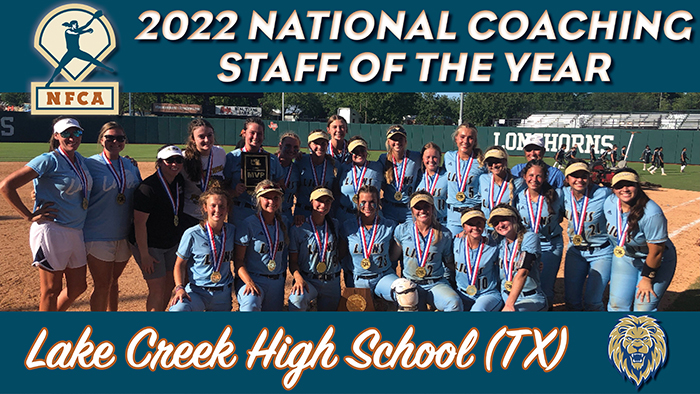 LOUISVILLE, Ky. – Undefeated Lake Creek High School (Texas) was voted the 2022 NFCA High School National Coaching Staff of the Year, the Association announced  on Monday afternoon. The Lions, under the direction of head coach Michelle Rochinski, capped off a 41-0 season with a Texas 5A state championship.

Rochinski, along with guidance from assistant coaches, Shauna Hazlewood and Brenna Huffman, steered Lake Creek – in just its fourth year of varsity competition – to the program’s first state title with a 7-0 victory over Georgetown. Over the course of the season, the Lions outscored their opposition 337-33 and registered 19 shutouts.

Lake Creek finished as the No. 1 team in the final USA Today/NFCA High School Super 25 Poll, holding the No. 1 spot since the third poll of the season, and was named 2022 USA Today High School Sports Girls Team of the Year.

Winners are voted on by High School member head coaches. Rochinski and her staff will be honored at the annual NFCA Awards Brunch, Dec. 10 at the 2022 NFCA Convention in San Antonio.