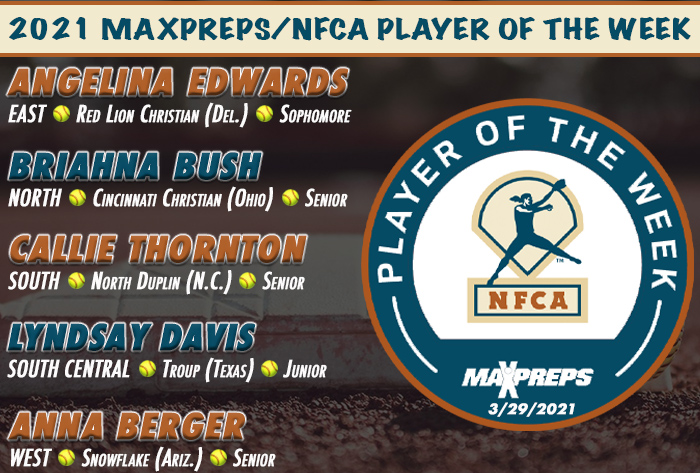 Edwards helped Red Lion Christian to a season-opening win over MOT Charter. She tossed a five-inning no-hitter, striking out nine and walking one. At the plate, Edwards was 2-for 3 with three RBI and two runs scored.

In a season-opening doubleheader sweep of Carroll, Bush was 6-for-6 with three home runs and 12 RBI, while picking up a pair of victories in the circle with a 0.58 ERA and 30 strikeouts over 12 innings. The senior had a monstrous game two, going yard twice and driving in eight of the Cougars’ 11 runs. She also allowed an unearned run with 10 punchouts and no walks over five frames. In the opener, Bush scattered four hits and punched out 20 Patriots. She homered and registered three RBI in the victory.

Thornton went 3-0 with a 0.00 ERA and 35 strikeouts, while hitting .500 with 11 RBI to help the Rebels start 3-0 in 2021. She tossed a five-inning no-hitter against Lakewood in which she surrendered an unearned run, struck out 12 and walked two. In a complete-game shutout of Rosewood, Thornton fanned 14, allowed two hits and issued a pair of walks. At the plate, she registered two hits in each contest. Thornton homered and drove in three runs against Rosewood, while recording four RBI and scoring three times in each of the wins over Union and Lakewood.

Davis was nearly unhittable, tossing a pair of complete-game shutouts, including a no-hitter versus Arp. The junior hurler fanned 34, walked one and surrendered just one hit over 14 innings of work. Davis struck out 17 and issued a walk in the no-no. She followed that with a one-hit blanking of Elysian Fields. Again, Davis sat down 17 batters in a 4-0 triumph. Additionally, she was 4-for-8 at the plate, including a 3-for-5 outing with a double, RBI and two runs scored versus Arp.

Berger was a perfect 11-fo-11 and reached base safely in all 15 plate appearances last week. She recorded eight extra-base hits, 14 RBI, 13 runs and a 2.454 slugging percentage. Berger, a senior, went 5-for-5 with two triples, two home runs, six RBI and five runs scored in the second contest against Alchesay. She added a double and long ball, while driving in five and scoring three times the first time around versus the Falcons. Berger registered added two doubles and four runs in a win over Thatcher. The right-handed hurler also allowed a run and five hits, while striking out 21 in 10 innings of work.