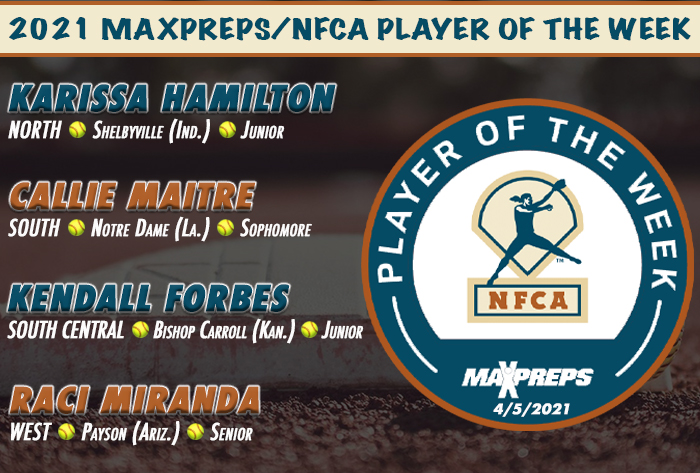 Hamilton opened the 2021 campaign with a bang, going 8-for-11 (.889) at the plate with five home runs and 13 RBI, leading Shelbyville to three triumphs last week. The junior slugged 2.667, reached base at a .909 clip and did not strike out in 13 plate appearances. After homering and driving in three runs in the season opener against Cathedral, Hamilton sent three over the fence with six RBI and three runs scored in game on versus Jennings County. In the nightcap against the Panthers, she homered again, doubled and tacked on four RBI.

Maitre hit .909 (10-for-11) with four doubles, three home runs, 11 RBI and 13 runs scored in four contests last week. She registered a pair of 4-for-4 outings against Cecilia and Lake Arthur. In the latter game, Maitre doubled, homered twice, drove in six and scored four times. Against Cecilia, she pitched in with a double, long ball, four RBI and five runs scored. The sophomore scored and doubled twice versus Port Barre and added two more runs against Erath.

Forbes was a perfect 8-for-8 with six extra-base hits (2.125 SLG%) in a sweep of Southeast. She went 4-for-4 in both ends of the twinbill. Forbes recorded a pair of doubles, three runs and an RBI in game one. The junior infielder capped off her day with two more doubles, a triple, home run, three RBI and four runs in the nightcap.

Miranda twirled three shutouts, including a no-hitter, while hitting .600 with two home runs and seven RBI to lead Payson to three victories last week. The senior no hit Holbrook in her first start, fanning 18 and walking just one over seven innings of work. She would go on to toss two-hit and one-hit shutouts versus Blue Ridge with 16 and 11 punchouts, while not walking a batter. At the plate, Miranda homered in each win over Blue Ridge, driving in three and two runs, respectively. Against Holbrook, she was 2-for-4 with a double, triple, two RBI and two runs scored.