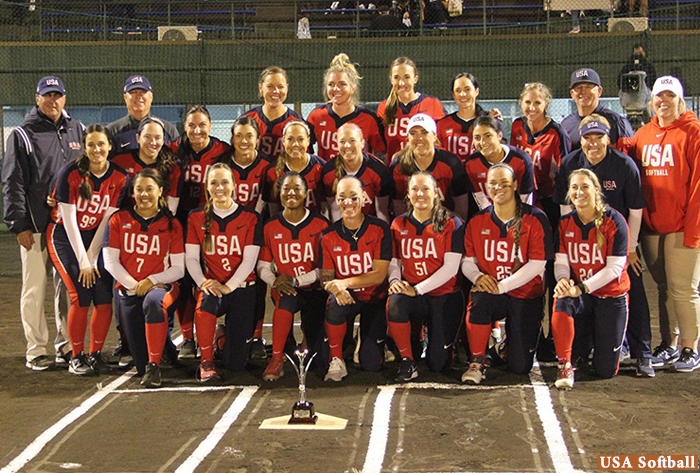 “First of all I am very proud of the way this team represented the game of softball and the USA Softball community,” said Women’s National Team Head Coach, Ken Eriksen.  “This was a very good effort from 20 players that regained the Japan Cup Championship. To realize that this program went undefeated the entire summer and fall season in international competition is to realize something special. To win the Gold Medal at the International Cup, the Japan Cup, and the World Championship was one heck of a trifecta. The icing? Earning the qualifying spot in the Tokyo 2020 Olympic Games.  Now the work begins for next summer and our pursuit of the Pan American Games Gold Medal in Peru.”

Japan threatened early after retiring the U.S. offense in order in the top of the first inning.  A leadoff double and back-to-back walks loaded the bases with one out, but Abbott got out of the inning unscathed with a strikeout and ground out.

The U.S. broke the scoreless deadlock in the top of the fourth. Following a two-out walk by Valeria Arioto, Delaney Spaulding drove the first pitch she saw over the right field fence. For Arioto it was her team-best 17th free pass of the season. The two-run blast gave the Abbott and the U.S. all the runs they would need.

Chidester doubled the lead in the top of the fifth with her two-run shot.  Aubree Munro doubled to center with one out and two batters later Chidester drilled the ball over the fence, making it a four-run advantage for the Americans.

From there, Abbott took care of the Japan offense with ease, retiring the side in each of the final three innings.

In addition to Chidester, Merritt, Munro and Spaulding, Janie Reed and Sahvanna Jaquish each recorded hits in the win.  Abbott fanned 10, allowed two hits and walked two in the complete-game shutout to earn the Japan Cup MVP honor.

The conclusion of the Japan Cup brings the 2018 season to an end for the USA Softball Women’s National Team (WNT).  In addition to the Japan Cup title, the U.S. also claimed: the USA Softball International Cup, won back-to-back World Baseball Softball Confederation (WBSC) Women’s World Championships and qualified for the Tokyo 2020 Olympic Games.

Members of the USA Softball WNT, along with additional invitees, will now set their sights on the 2019 USA Softball WNT Selection Trials, which are slated for January 1-6 in Clearwater, Fla.