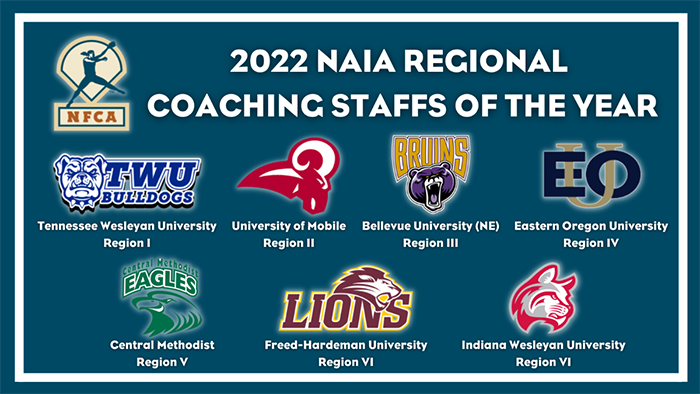 LOUISVILLE, Ky. – Seven programs were selected by their peers as 2022 NFCA NAIA Regional Coaching Staffs of the Year, announced the Association on Wednesday afternoon.

Tennessee Wesleyan, Mobile, Freed-Hardeman and Indiana Wesleyan each earned a trip to the 2022 NAIA Softball World Series, while Eastern Oregon and Central Methodist each were NAIA Softball National Championship Opening Round participants.

Guided the Bulldogs to their first-ever NAIA World Series as the No. 9 overall seed … Swept through the Bowling Green Opening Round Bracket as the No. 3 seed … Won the Appalachian Athletic Conference Tournament championship for the first time since 2015 … Earned its first national ranking since 2019, and finished 21st in the final NAIA Coaches’ Poll of the regular season … Headed into World Series with a 37-7 record and 22-25 in AAC play.

No. 1 overall seed at the NAIA World Series … Entered the World Series with a NAIA-best 49-2 record and earned a first-round bye …. Swept through the NAIA Opening Round Gulf Shores, Ala. bracket … Opened 2022 campaign 34-0, a program record for most consecutive victories … Sellers-Cook was named Southern States Athletic Conference Coach of the Year … Sellers-Cook earned her 500th career victory in 2022 … SSAC Team Sportsmanship Award recipients.

Finished 2022 with a 42-13 overall record and 24-2 mark in North Star Athletic Association action … The Bruins won the NSAA regular-season title and was the tournament runner-up … Cimino was named NSAA Coach of the Year for the fourth time in her career, while eight Bruins were selected to the NSAA first team, including Pitcher of the Year Katie Cunningham and Newcomer of the Year Reese Floro.

Earned an at-large bid and was the runner up in the NAIA’s Opening Round Oklahoma City bracket … Posted a 43-17 overall record, a program record for victories … Ranked 15th in the final NAIA Coaches’ Poll of the regular season … The Mountaineers registered a 24-6 mark in Cascade College Conference action to finish third … The five All-CCC selections are the most under Christian.

Earned the No. 1 seed in the Bowling Green, Ky. Opening Round Championship bracket … Posted a 42-7 record and reached the championship game of the Opening Round … The Eagles swept the Heart of America regular season and tournament titles for the first time since 2014 … Pat Reardon was named Heart Coach of the Year.

Advanced to the NAIA World Series and earned the No. 3 overall seed … The Lions captured the Henderson, Tenn. Opening Round Championship bracket by winning four straight elimination games after dropping their opener … Won their first-ever Mid-South Conference regular season championship, along with a MSC Tournament crown … Todd Humphry and Kaylyn Graham were named MHC Head Coach and Assistant Coach of the Year respectively.

Earned a trip to the NAIA World Series for the first time since 2018 and also advanced to the winner’s bracket for the first time … Sixth overall seed at the World Series and ranked seventh in the final NAIA regular season Coaches’ Poll … Perfect 3-0 mark as the No. 1 seed hosting the NAIA’s Opening Round Marion bracket … Undefeated (4-0) run to a Crossroads League tournament title and also collected first outright regular season league championship since 2005 … Babinski was named Crossroads Coach of the Year.