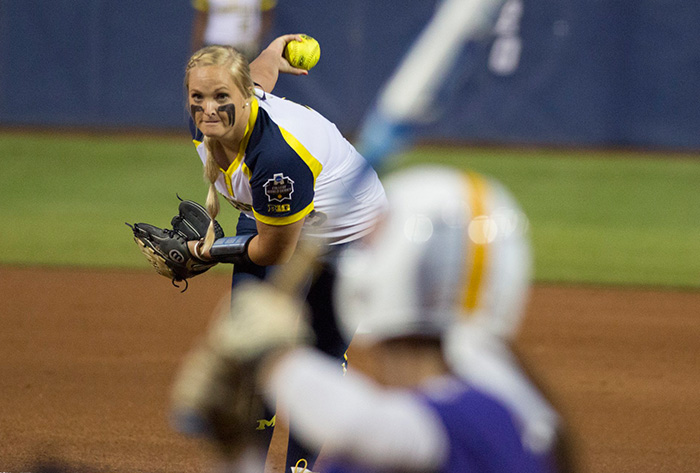 OKLAHOMA CITY – Megan Betsa’s four-hit shutout and Tera Blanco’s two-run double in the sixth inning powered No. 2 Michigan to a 2-0 victory over No. 10 LSU in game four of the 2016 Women’s College World Series, Friday evening at ASA Hall of Fame Stadium.

Betsa (28-3) struck out eight, walked two and did not allow an LSU runner to reach third base. In the innings that the Tigers (50-17) reached second, the junior NFCA All-American was able to get out of those jams. The second of the those situations came in the top of the fifth, but Bailey Landry was hit by the ball outside the batter’s box and then Betsa fanned Bianka Bell. She would retire the final eight batters of the game for the win.

In the sixth, the Wolverines (52-5) loaded the bases with no outs against starter Allie Walljasper, who limited Michigan’s opportunities through the first five frames. Blanco greeted relief pitcher Carly Hoover with a line drive double to right that plated Sierra Romero and Kelly Christner with the only runs of the contest.

Walljasper (11-6) suffered the tough loss, allowing two runs on four hits with three walks and strikeout. After the Blanco double, Hoover retired the next three batters of the sixth, including two via the punchout.

Both squads return to the field tomorrow. LSU will take on Alabama in an elimination game at 1:30 ET, while Michigan will do battle with Oklahoma at 8:30 p.m. CT.