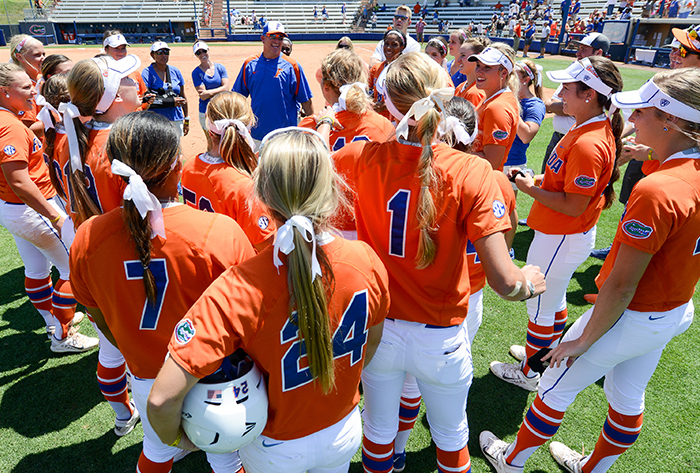 LOUISVILLE, Ky. – As 64 teams prepare for the postseason, Oklahoma continues its move up, Auburn returns to the top-five and Utah joins the poll for the first time, while Florida remains No. 1 in the final USA Today/NFCA Division I Top 25 Coaches Poll of the regular season. With the NCAA Championship field set, the final poll will be announced after the Women’s College World Series concludes.

The Gators (53-5) enter the 2016 postseason as the No. 1 overall seed and are looking for their third straight national championship, a feat only accomplished by UCLA (1988-90). They received 30 first-place votes and 798 points. Florida’s regular season was ended in the semifinals of the SEC tournament. After defeating Ole Miss, 1-0 in the quarterfinals, the Gators were edged by eventual champion Auburn, 2-1.

After taking both gam­es from Oklahoma State (8-0, 5-2) in Bedlam, Oklahoma wrapped up the regular season with a program-best 17-1 Big 12 record and jumped up two more spots to No. 3. The Sooners (47-7) ride into the NCAA Championships on a 22-game winning streak and will be the NCAA’s No. 3 seed.

SEC tournament champion Auburn, who received the other two first-place votes, returns to the top-five after dropping out two weeks ago. The Tigers (49-9) dispatched of then No. 4 Alabama (6-4), No. 1 Florida (2-1) and then-No. 12 LSU (7-1) to claim their second straight tournament title and the NCAA tournament’s fourth seed.

Alabama fell two positions after being defeated in the quarterfinals of the SEC tournament by eventual champion, then-No. 8 Auburn (4-6). The Crimson Tide (46-12) will be the No. 6 seed and host a NCAA Regional.

Florida State and James Madison dropped one spot each despite claiming conference tournament titles. The seventh-ranked Seminoles (47-8) earned their third consecutive ACC championship and the NCAA’s No. 8 seed after it cruised through the tournament with victories over Pitt (8-0), North Carolina (7-1) and then-No. 20 Notre Dame (7-3). The NCAA’s No. 7 seed Dukes (46-4) also ran through their respective tournament, claiming the Colonial Athletic Association crown, defeating Delaware (2-0) and run-ruling Towson twice (14-2, 8-0).

The USA Today/NFCA Division I Top 25 Poll is voted on by 32 NCAA Division I head coaches, one representing each conference. Records reflect games played through May 15, 2016.