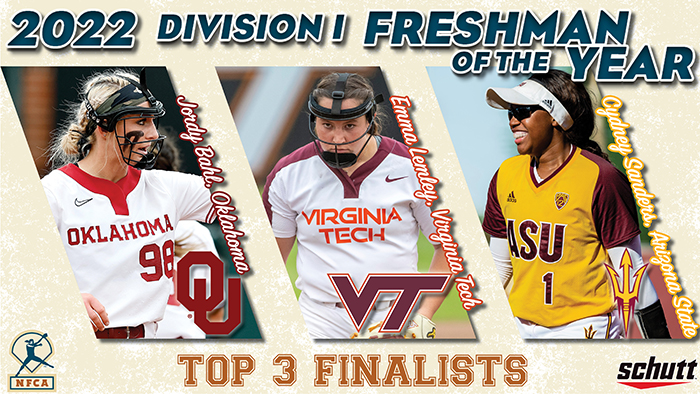 LOUISVILLE, Ky. – Oklahoma’s Jordy Bahl, Virginia Tech’s Emma Lemley and Arizona State’s Cydney Sanders are the three finalists for the 2022 NFCA / Schutt Sports Division I National Freshman of the Year, the Association revealed on Thursday afternoon. The winner, which is voted on by the Association’s Division I All-America Committee, will be announced on the evening of June 1 at the 2022 NCAA Women’s College World Series banquet in Oklahoma City.

Bahl, a first-team NFCA All-Region selection, was the Big 12’s Freshman and Co-Pitcher of the Year. The rookie hurler paces NCAA Division I’s top pitching staff with 21 wins, 199 strikeouts, 10.5 strikeouts per seven innings and seven shutouts in 132.1 innings of work. Bahl sports a 21-1 record with a 0.95 ERA. She has issued just 29 walks and held her opposition to a .137 batting average. The Papillion, Neb. native has recorded six double-digit strikeout games, which includes a 16-K performance vs. Tennessee and 15-K outing at Texas.  Bahl currently ranks top-15 nationally in hits allowed per seven innings (3.33 / 4th),  ERA (5th) and strikeouts per seven innings (12th).

Named the Atlantic Coast Conference’s freshman of the Year, Lemley is one half of Virginia Tech’s pitching duo that keyed the Hokies’ highest national ranking (2nd) and first-ever NCAA Regional and Super Regional host. She boasts a 16-5 record with a 1.87 ERA and 207 strikeouts in 134.2 innings. Lemley, who hails from Forest, Va., has posted six shutouts, a 0.97 WHIP and a .176 batting average against. A first-team NFCA All-Region honoree, she has recorded nine double-digit strikeout performances, including a pair of 16-K performances against Wisconsin (first collegiate start) and Syracuse.

All three are competing this weekend on their home fields in Super Regionals.