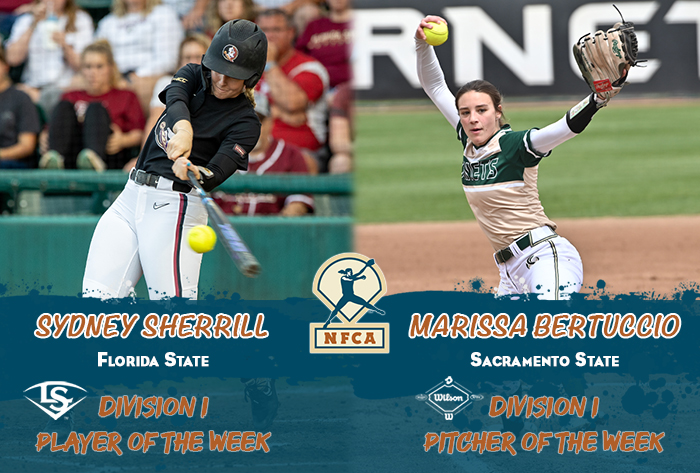 LOUISVILLE, Ky. – In the final honor of 2022, Florida State’s Sydney Sherrill and Sacramento State’s Marissa Bertuccio were named Division I Louisville Slugger/NFCA Player and Wilson/NFCA Pitcher of the Week, respectively. The duo is being recognized for their outstanding play for the week of May 2-8.

Sherrill hit. .467 with four home runs, six RBI and slugged 1.440 as the Seminoles closed out the season with four wins last week. The graduate third baseman broke the FSU single-game record with three home runs against North Carolina State, during which the Noles set a single-game record with seven long balls. She added a fourth homer of the week in the season finale and finished 2-for-3 with two RBI and two runs scored. Sherrill added a double and RBI in a mid-week victory over then-No. 10 Florida.

Bertuccio, a junior from Merced, Calif., tossed her first career no-hitter in a 4-0 win over Southern Utah, the program’s first seven-inning no-no since 2019. She fanned a career-high 13 batters. Bertuccio followed that with five innings of shutout relief in another Hornets’ victory. For the weekend, she posted a 2-0 record, allowing zero runs on two hits, striking out 20 and holding the Thunderbirds to a .054 batting average in 12 innings of work.

The Division I Player & Pitcher of Week awards must be nominated by member head coaches and are voted on by the NFCA's Division I Top 25 Committee, which consists of one head coach representing each of the 32 NCAA DI Conferences.