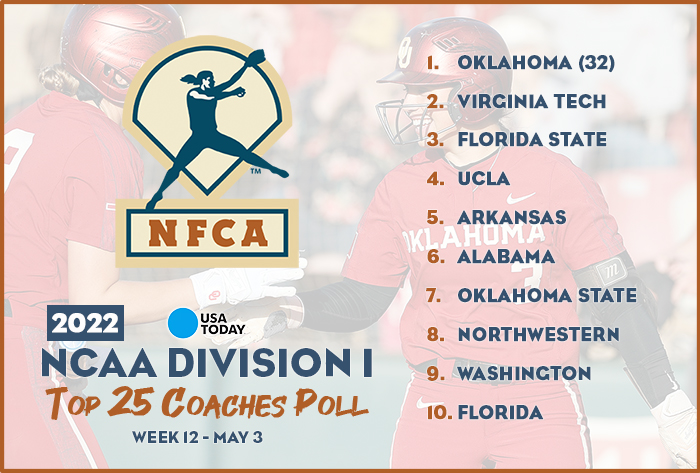 LOUISVILLE, Ky. – Oklahoma enters its 26th consecutive week at No. 1, while Arkansas elevated to No. 5 in this week’s 2022 USA Today/NFCA Division I Top 25 Coaches Poll. The Sooners (45-1), who have not relinquished their hold since ascending to the top spot on March 2, 2021, outscored Kansas 35-1.

With the Big 12 regular-season title on the line, OU hosts No. 7 Oklahoma State in Bedlam this weekend. The Sooners and Cowgirls (38-9) are deadlocked at 14-1 in league play. OU is looking for its 10th consecutive title, while Oklahoma State would capture its first-ever Big 12 title, last winning a conference championship in 1995 (Big 8).

Virginia Tech (39-6) remained at No. 2 clinching the Atlantic Coast Conference regular-season title with a three-game sweep of Boston College. Coming off two one-run home wins over then-No. 6 Oklahoma State, Florida State (45-5) moved up to No. 3, while UCLA (39-6) dropped to No. 4 after a 2-1 Pac-12 showing against Utah.

Alabama (39-9) fell to No. 6 as it dropped a non-conference road game at Western Kentucky in its only action last week.

Missouri, coming off its second straight SEC sweep, returns to the rankings at No. 24. The Tigers (31-17) thumped then-No. 9 Kentucky, 9-1, in Lexington on April 25 and then defeated then-RV Texas A&M in all three games in Columbia. Stanford fell back out after it was swept by Washington.

The 2022 USA Today/NFCA Division I Top 25 Coaches Poll is voted on by 32 NCAA Division I head coaches with one representing each of the NCAA’s Division I Conferences. Records reflect games played through May 1.

Dropped Out: No. 24 Stanford

The 2022 USA Today / NFCA Division I Top 25 Coaches Poll is voted on by 32 NCAA Division I head coaches with one representing each of the NCAA’s Division I Conferences. Records reflect games played through May 1, 2022.