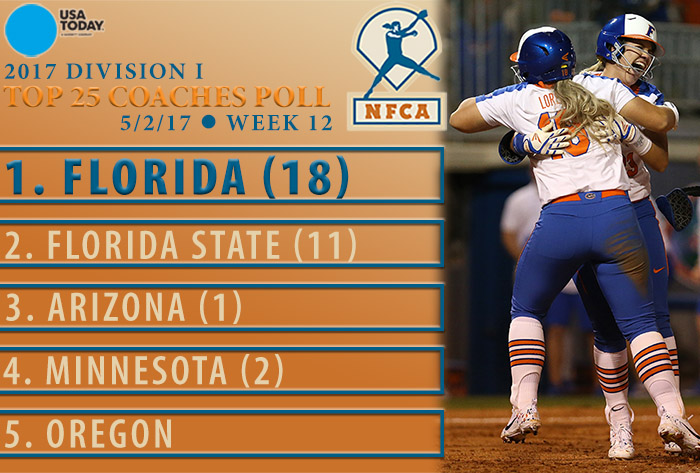 LOUISVILLE, Ky. – Florida remained No. 1 and the top-four teams stood pat in this week’s USA Today/NFCA Division I Top 25 Coaches Poll. The gap shortened to just eight points between the top-ranked Gators (46-4) and No. 2 Florida State as they received 18 and 11 first-place votes, respectively.

UF and FSU will meet on Wednesday in Tallahassee, Fla. in the first of the Seminoles’ two late season top-five matchups.

Florida wrapped up SEC play with a series win on the road against No. 11 Tennessee and its third regular season league title. The Gators blanked the Vols in the first two contests, 5-0 and 9-0, before dropping the finale, 5-1. It marked the first series win in Knoxville since 2012.

The Seminoles (47-3-1) closed out a perfect regular season in conference play by knocking off Louisville last Monday and sweeping then-RV North Carolina at home in ACC action over the weekend. FSU finished undefeated (24-0) in league play for the fifth time in program history and became the first ACC squad to end the season with an undefeated mark since 2003, when it posted an 8-0 mark.

Minnesota, who earned two first-place votes and 711 points, topped North Dakota State (3-1, 6-0) and swept a Big Ten series from Purdue (8-0, 9-1, 12-2) and now own the most victories in Division I with 48. The five victories extended the fourth-ranked Gophers (48-3) winning streak to 19 games, matching their school record which was set at the start the 2017 campaign.

No. 5 Oregon returns to the top-five after cruising to a three-game sweep of Oregon State (8-0, 7-2, 7-0) in Pac-12 action. With the wins, the Ducks (41-6) extended their Civil War winning streak to 15 games. They will host Florida State in a rare late-season non-conference matchup this weekend.

No. 6 Oklahoma and No. 7 Washington shifted up one spot each, while Texas A&M fell three positions to No. 8. The Sooners (44-8) and Huskies (37-10) swept their respective league road series against Texas Tech and then-RV California, while the Aggies (41-7) dropped two-of-three at then-No. 16 Kentucky.

The No. 9 and 10 spots remained the same. Ninth-ranked Auburn picked up four wins, three against RV Mississippi State, and No. 10 Utah was idle due to weather.

American Athletic Conference regular season champs Tulsa jumped in at No. 25. The Hurricane (36-13) have won 10 straight and clinched their first regular season league title since 2014. Georgia dropped out of the poll for the first time since May 14, 2013 (final poll).

The 2017 USA Today/NFCA Division I Top 25 Poll is voted on by 32 NCAA Division I head coaches, one representing each conference.  Records reflect games played through April 30.

Dropped Out: No. 22 Georgia

The USA Today/NFCA Division I Coaches Poll is voted on by 32 NCAA Division I head coaches, one representing each conference.  Records reflect games played through April 30.