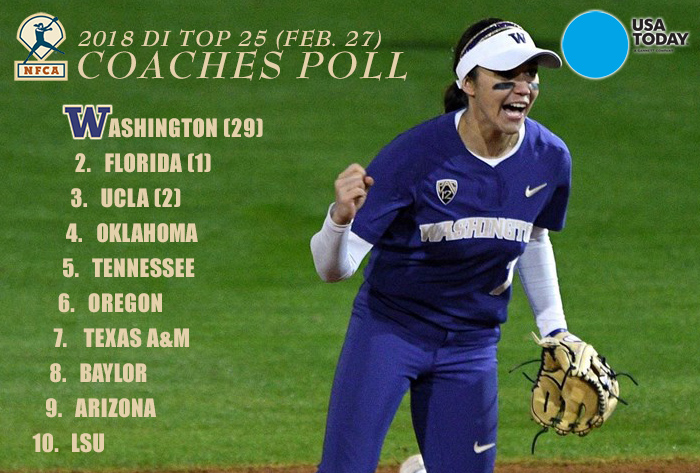 LOUISVILLE, Ky. – Following an 8-0 week, Washington extended its hold on No. 1 in this week’s USA Today/NFCA Division I Top 25 Coaches Poll. The Huskies (18-0) received 29 first-place votes and 794 points as the top four spots remained the same.

UW opened its week with three road wins in the Lone Star State and continued with a perfect showing at the Mary Nutter Classic. The Huskies knocked off then-RV Notre Dame, then-No. 6 Texas A&M, RV Nebraska, Wisconsin and new No. 22 Long Beach State.

Florida, which received one first-place vote, edged out UCLA for the No. 2 spot by five points. The Gators (16-1) also went 8-0, notching all their victories at home. UF’s pitching staff posted five shutouts and limited their opponents to five runs. The third-ranked Bruins (15-0) also stayed undefeated and captured the final two first-place votes. UCLA capped off the Mary Nutter I with a 7-6 win over Grand Canyon before a perfect 5-0 showing at the Mary Nutter II, which included wins over RV Nebraska and then-No. 7 LSU.

No. 4 Oklahoma went 3-1 at the Mary Nutter. The Sooners (9-2) knocked off then-No. 17 Arizona State, BYU and North Carolina before dropping their closer to then-No. 13 Arizona.

After a 6-0 week at the Mary Nutter Classic, Tennessee catapulted six spots to No. 5. The Lady Vols (16-1) outscored their opponents, 42-5 and picked up two wins over Pac-12 foes, then-No. 5 Oregon and RV Oregon State.

Along with the win over the Ducks, the Aggies knocked off then-RV Notre Dame and then-No. 19 California. After its tournament was canceled, Baylor picked up two road wins at Abilene Christian to remain perfect at 9-0.

The 2018 USA Today/NFCA Division I Top 25 Poll is voted on by 32 NCAA Division I head coaches, one representing each conference. Records reflect games played through Feb. 25.

The 2018 USA Today / NFCA Division I Top 25 Coaches Poll is voted on by 32 NCAA Division I head coaches with one representing each of the NCAA’s Division I Conferences. Records reflect play through Feb. 25, 2018