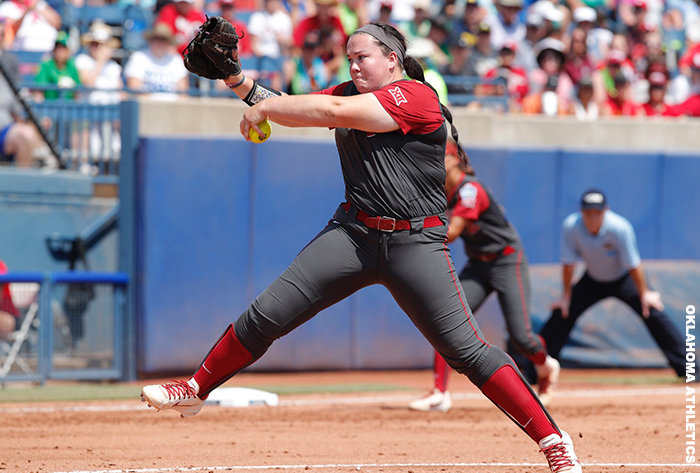 OKLAHOMA CITY -- No. 4 Oklahoma and No. 6 Florida State each won two games and staved off elmination at the Women's College World Series, Saturday at ASA Hall of Fame Stadium. The Sooners (56-11) and Seminoles (54-12) moved on to the semifinals tomorrow.

OU will take on No. 4 Washington in the first semifinal at 1 p.m. ET tomorrow, followed by FSU and No. 3 UCLA at 3:30 p.m. ET. If the Sooners or Seminoles win those contests they would force a winner-take-all semifinal later in the afternoon. Four program's terrific seasons - Georgia, Arizona State, Oregon and Florida - came to an end today.

Paige Parker tossed her second straight gem to help Oklahoma stave off elimination and advance to the WCWS semifinals. The senior southpaw held Florida to just two hits and struck out eight in the 2-0 victory.

Jocelyn Alo gave Parker the only run she would need in the first innings, launching a towering solo home run to leftfield. The first-pitch long ball was her 30th of the season, matching a NCAA DI record.

OU doubled its lead to 2-0 in the fifth. With two outs and the bases loaded after an intentional walk to Alo, Shay Knighten struck out swinging. However, Janell Wheaton was unable to corral the pitch in the dirt and Caleigh Clifton scooted home with the run.

Kelly Barnhill and Aleshia Ocasio held the Sooners to three hits and struck out seven. Barnhill lasted just two innings, allowing a run on two hits with a strikeout and a walk. Ocasio fanned six, walked three and surrendered a run in four innings of relief work.

Florida State won its second straight elimination game of the day, defeating No. 1 Oregon (53-10) 4-1 in the final contest of day three.

The Seminoles struck first with a run in the top of the third. Elizabeth Mason stroked a one-out double to left centerfield, plating Cali Harrod from second base.

Mason struck again in the fifth, lacing a run-scoring single to left and chasing Oregon starter Miranda Elish with no outs and runners on first and second. Megan Kleist stepped in the circle and kept the deficit at 2-0 retiring the next three batters.

In the sixth, FSU tacked on another run when Zoe Casas came within inches of a three-run homer, but settled for a RBI single off the wall in left. Head coach Mike White went to the bullpen for a second time in as many innings, calling on Maggie Balint. She prevented any more damage, striking out Harrod looking and inducing a foul out and a fielder’s choice grounder to third.

The Ducks got on the board with a run in the bottom half of the sixth. Haley Cruse lined a two-out double through the left centerfield gap to make it 3-1. A moonshot home run down the rightfield line by Sydney Sherrill pushed the lead back to three runs at 4-1.

After the second walk of the inning, Meghan King, who pitched a complete game earlier in the day, came in relief of Kylee Hanson and slammed the door shut on a Duck rally. She induced a one-pitch flyball to left and struck out pinch hitter April Utecht to earn the save.

Mason finished 2-for-3 with a double and two RBI. Hanson (29-6) went 6.1, allowing an unearned run on five hits with four strikeouts and two walks.

Elish (25-2) suffered the loss. In four-plus innings, she scattered six hits, allowed two runs, struck out five and walked one. Cruse had two of the Ducks’ five hits.

Parker’s efficient outing included seven strikeouts and two walks on just 78 pitches, 55 of which went for strikes. She improved to 30-3 on the season and 9-1 overall at the WCWS.

After the Sooners stranded three runners, two on third, in scoring position, Jocelyn Alo led off the third with an opposite field homer to rightfield for a 1-0 advantage. A seeing-eye RBI single by Leah Wodach with two outs in the sixth gave OU a 2-0 cushion.

G Juarez took the loss for ASU. In four innings of work, she surrendered a run on four hits with four strikeouts and two walks. Breanna Macha tossed the final three innings, allowing a run on two hits with three punchouts and a walk.

Zoe Casas drove in three runs and Meghan King tossed a complete-game as No. 6 Florida State knocked off No. 7 Georgia, 6-2 to stay alive at the WCWS.

Casas finished 2-for-3 with a double and three RBI. King (23-6) did not allow an earned run on five hits with four strikeouts and four walks.

The Seminoles jumped on top early with a run in the bottom of the second. A two-out RBI double off the centerfield fence by Casas plated Anna Shelnutt for a 1-0 lead.

A three-run fourth pushed FSU’s advantage to 4-0. Casas struck again with a two-run single back up the middle. Two batters later, Elizabeth Mason lofted a sac fly to rightfield.

The Bulldogs cut the lead in half in the fifth with a pair of two-out runs when Justice Milz roped a two-run triple off the rightfield fence. The inning was extended prior to Milz’s at-bat on an error by the shortstop.

FSU answered with two runs of its own in the bottom half of the fifth as Dani Morgan drove in two with a hard single to right. They added another on a bases loaded walk in the sixth, pushing their advantage to 7-2.

Jessie Warren and Morgan had two hits apiece for the Seminoles, while Shelnutt scored twice and drew three walks.