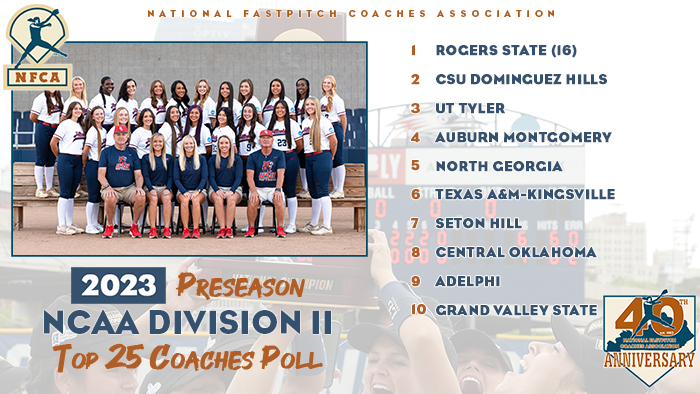 LOUISVILLE, Ky. – Rogers State, the 2022 national champion, is the No. 1 team in the 2023 NFCA Division II Top 25 Preseason Coaches Poll. The Hillcats were the unanimous choice, receiving all 16 votes and 400 points.

The Hillcats (58-10), under the direction of Andrea Vaughan, posted a perfect 5-0 record at the NCAA Division II National Championships in Denver, culminating with a Championship series sweep of Cal State Dominguez Hills. RSU, which shattered the program’s win record in 2022, is the Mid-America Intercollegiate Athletics Association (MIAA) preseason favorite.

National runner-up Cal State Dominguez Hills comes in at No. 2. The Toros (45-24) reached the Championship series as the finals’ No. 8 seed by knocking off No. 1 seed UT Tyler and winning three elimination games after a defeat to the Hillcats. Led by head coach Jim Maier, Dominguez Hills earned its trip to Denver by winning their Regional against the West’s  No. 2 seed Concordia Irvine and the Super Regional at the No. 1 seed Cal State San Marcos.

National semifinalist UT Tyler comes in at No. 3. The Patriots (49-9) reached the semifinals of the National Championships in their first appearance as a Division II program and finished with a 2-2 mark in Denver, Auburn University at Montgomery (49-13), also making its first appearance in the National Championships, posted an opening win at the finals and went 1-2 in Denver. Both programs won winner-take-all games in regionals and needed all three games to advance to finals.

The other national semifinalist North Georgia, opens the season at No. 5. The NightHawks (49-18) cruised through regionals and won a three-game Super Regional against preseason No. 20 Lincoln Memorial. In Denver, UNG went 2-2, falling twice to Dominguez Hills.

Seton Hill and Adelphi, who reached the National Championships, start 2023 at No. 7 and No. 9, respectively. Three Super Regional participants – No. 6 Texas A&M-Kingsville, No. 8 Central Oklahoma and No. 10 Grand Valley State – make up the rest of the Top 10.

The Lone Star Conference (LSC) and MIAA each landed two teams in the top 10 with the LSC topping all conferences with four nationally-ranked programs (No. 3 UT Tyler, No. 6 A&M-Kingsville, No. 18 Angelo State & No. 21 Lubbock Christian).

The 2023 NFCA Division II Top 25 Poll is voted on by 16 NCAA Division II head coaches with two representing each of the eight NCAA regions. The poll will be released each Tuesday at noon ET with the first regular-season poll announced on Feb. 14.

Celebrating 40 years in 2023, the NFCA is the professional organization for fastpitch softball coaches. Known for its highly-regarded coaches polls and All-America awards, the NFCA also educates and supports softball coaches on a variety of different levels: from podcasts to awards, to in-person events and National Convention.