Humboldt and North Alabama advance in winner’s bracket; No. 16 Armstrong State and No. 15 Southern Arkansas stave off elimination 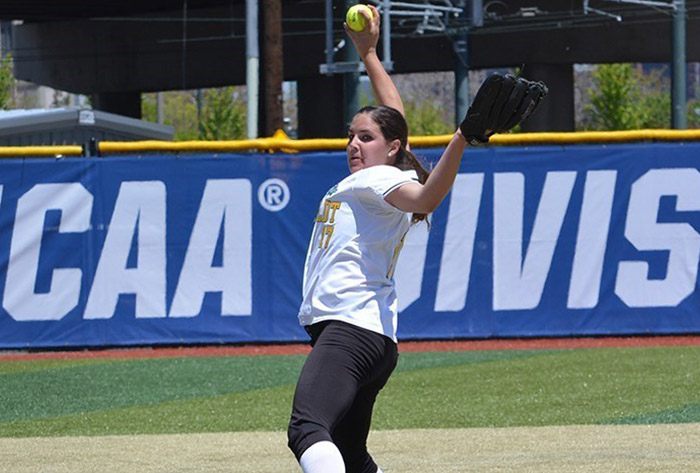 DENVER, Colo. – No. 5 Humboldt State and No. 3 North Alabama advanced in the winners bracket on day two of the Division II Softball Championships. The Jacks (52-5-1) defeated No. 1 West Texas A&M 8-5 and the Lions (57-6) topped Adelphi, 5-1 on Wednesday afternoon at the Regency Athletics Complex on the campus of Metropolitan State University at Denver.

Humboldt State and North Alabama are one win away from reaching the championship series. The squads will await their opponent and play tomorrow, May 19 at 5:00 p.m. and 7:30 p.m. MT, respectively.

Humboldt State used some timely hitting, a balanced offensive attack and broke open a tight ballgame with a five-run fifth to defeat West Texas A&M, 8-5 in the first winner’s bracket game of the day. After the teams traded runs in the first, the Jacks scored two in the fourth and five in the fifth for an 8-1 lead.

The Lady Buffs would not go down quietly, pushing across three in the sixth and another in the seventh before the rally was halted.

With the score knotted at one thanks to Vigil’s long ball in the bottom of the first, Bejaran gave HSU the lead for good with a solo home run of her own in the fourth.

Taking a 3-1 lead into the bottom of the fifth, Hollingsworth and Pena registered RBI doubles and Kalyn Paque a run-scoring single to push the lead to 6-1. A perfectly executed squeeze by Haley and a sac fly from Sydney Roberts closed out the scoring.

WT made it interesting, plating three in the sixth, courtesy of a bases loaded walk and RBI singles by Kourtney Coveney and Shayne Sharkey. A sac fly in the seventh brought the Lady Buffs within 8-5, but Madison Williams induced the final out to snuff the rally.

Katie Obbema earned the win in the circle, allowing four runs on seven hits with eight strikeouts and eight walks in five-plus innings of work. Though not credited with a save, Williams limited the damage in the sixth and allowed just a run on three hits with a strikeout to help complete the victory.

After falling behind 1-0 in the top of the fifth, North Alabama combined key hits with Adelphi miscues to answer with five in the bottom half and advance in the winner’s bracket with a 5-1 victory.

After four scoreless innings, Nicole Camera put the Panthers up 1-0 with a one-out RBI single. The Lions quickly responded as they took advantage of three Panther errors and two intentional walks to push across five runs, four of which were unearned. The key hits in the inning were a RBI double off the top of the top of the leftfield fence by Courtney Shields and Regan Tittle’s two-run single when the left and centerfielder collided.

Hillary Carpenter picked up the win with 2.1 innings of perfect shutout relief. The lefty came in with the bases loaded in the top of the fifth and recorded the final out and went on to retire the next six for her 30th win of the season.

Shields was 2-for-4 with a RBI and run scored.

Hannah Reppert homered twice as Armstrong State stayed alive with a 7-4 victory in the first elimination game of the tournament. Grand Valley State’s season comes to an end as the Midwest Region champs finished 2016 with a 43-13 record.

After falling behind 1-0 early, Reppert evened the contest with leadoff homer in the fourth and the Pirates took the lead for good on a RBI double by Logan Harrell. They added three more in the sixth to extend their lead to 5-1 thanks to RBI singles off the bats of Macey Coleman and Ashley Sterritt, along with a sac fly from Autumn Parrish.

The Lakers put a run on the board in the bottom of the sixth, but Reppert answered with her second long ball of the contest, a two-run shot in the top half of the seventh for a five-run cushion.

GVSU's McKenze Supernaw cut into the lead in the seventh with a two-run dinger of her own, but Jane Trzaska struck out the final batter to end it. Trzaska improved to 17-4 as she allowed two runs on three hits in 3.1 innings of relief work.

Supernaw finished 2-for-3 with three RBI and a run scored. Jenna Lenza also had two hit for the Lakers.

Southern Arkansas jumped out to a 4-0 lead in the first inning and cruised to a 7-0 win over Charleston in an elimination game on Wednesday evening. Kaylee Garner twirled a six-hit shutout and Maddie Dow went 3-for-3 at the plate to lead the Muleriders.

Garner struck out six and walked five to improve to 25-3 on the season.  Dow knocked in the first run and last run of the game for the Muleriders.

In the key four-run first, which saw Southern Arkansas record four hits, draw two walks and send nine batters to the plate. Dow put Southern Arkansas on the board with a single to left center. The other three runs scored on an error, a RBI single by Taylor Casada and sacrifice fly off the bat of Chelsea Jordan.

SAU added two more runs in the third on run-scoring singles by Summer Ehrig and Liz Hudgins and the final run on a RBI single by Dow in the fourth.