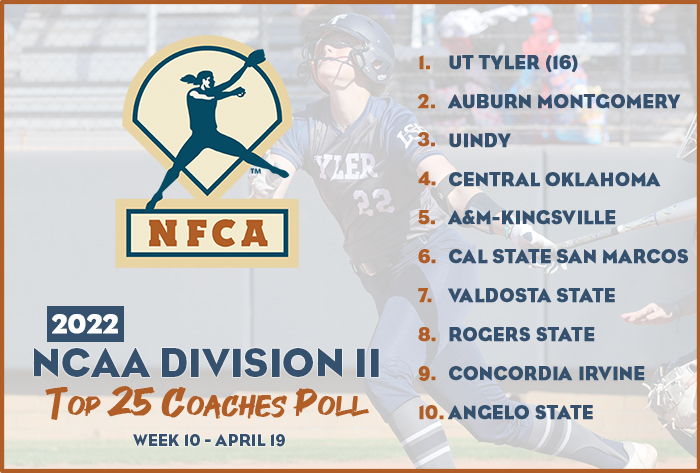 No. 4 Central Oklahoma (38-6) catapulted to No. 4 and extended its win streak to 11 games with four more MIAA victories, including two against then-No. 2 Rogers State (36-6). Texas A&M-Kingsville bumped up to No. 5 following two Lone Star Conference triumphs against St. Mary’s.

Cal State San Marcos (34-6), which dropped three-of-four to Cal State Dominguez Hills, dipped to No. 6. The Cougars were followed by Valdosta State at No. 7 and Rogers State at No. 8. Concordia Irvine swept Holy Names in a four-game PacWest series and landed at No. 9. Idle No. 10 Angelo State rounded out the top 10.

Joining the poll this week is Lenoir-Rhyne at No. 23 and Kutztown at No. 25, while then-No. 15 Lincoln Memorial and then-No. 25 East Stroudsburg dropped out.

The 2022 NFCA Division II Top 25 Poll is voted on by 16 NCAA Division II head coaches with two representing each of the eight NCAA regions. Records reflect games played through April 17.

Dropped Out:  No. 15 Lincoln Memorial, No. 25 East Stroudsburg