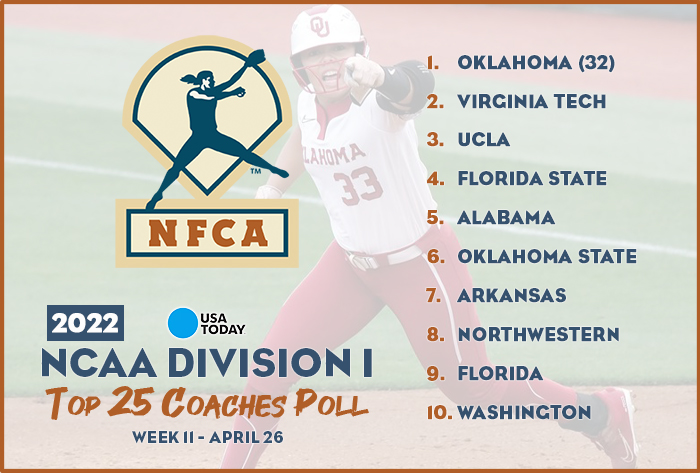 LOUISVILLE, Ky. – UT Tyler continued its hold on the No. 1 spot in this week’s 2022 Division II Top 25 Coaches Poll. The Patriots (38-4) posted a 4-0 mark last week, which included a pair of key Lone Star Conference victories over No. 15 Oklahoma Christian.

Entering its 11th week at No. 1, UT Tyler’s undefeated LSC weekend gave the Patriots a two-game lead in the league standings, heading into the final week of regular-season play. Riding an 11-game win streak, UT Tyler wraps up LSC play on Saturday, April 26 at home against No. 20 Texas A&M University-Commerce.

With Auburn-Montgomery dropping to No. 5 after suffering a loss to Christian Brothers, Indianapolis elevated to No. 2 and Texas A&M-Kingsville to No. 3 with Central Oklahoma remaining at No. 4 for the second straight week. All three programs reached the 40-win plateau over the weekend.

Rogers State (39-7) moved up two spots after a sweep of Harding and a split with Emporia State. Angelo State also captured four triumphs in LSC play and moved into the seventh spot. Following a four-game CCAA split with Cal State Monterey Bay, Cal State San Marcos (36-8) dipped to No. 8.

The 2022 NFCA Division II Top 25 Poll is voted on by 16 NCAA Division II head coaches with two representing each of the eight NCAA regions. Records reflect games played through April 24.