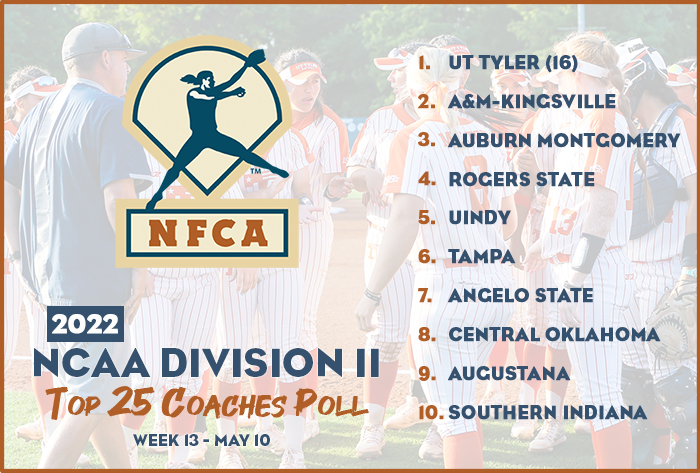 LOUISVILLE, Ky. – UT Tyler earned the top seed in the NCAA South Central Region and will enter the 64-team field as the No. 1 team in the final 2022 Division II Top 25 Coaches Poll of the regular season. Fresh of conference regular-season and tournament titles, Augustana and Southern Indiana enter the top 10 this week.

The Patriots (41-5) went 1-1 in their first-ever Lone Star Conference Tournament, falling to new-No. 14 and tourney champion Texas A&M University Commerce in the semifinals. UT Tyler will host a four-team pod with No. 7 Angelo State, No. 16 Lubbock Christian and RV Colorado Christian.

Texas A&M-Kingsville, which fell in the LSC title game to A&M-Commerce, remained at No. 2 and is the No. 3 overall seed in the South Central Region, heading to the previously-mentioned Lions for the region’s second pod.

Auburn-Montgomery captured its second straight Gulf South Conference tournament championship and will be the No. 1 overall seed in the South Region. The Warhawks (43-9) posted a 5-1 mark in the tournament, knocking off new-No. 24 UAH, 1-0, in the title game.

MIAA Tournament champion and Central Region No. 1 seed Rogers State elevated to No. 4. The Hillcats (47-9) swept through the tournament, including a nine-inning thriller against No. 23 Washburn in the title game. Rogers State sent it to extras with solo homer in the seventh and walked it off with a two-out two-run long ball by Chelsea Spain.

Great Lakes Valley Conference tournament runner-up Indianapolis dipped to No. 5 after falling in a league title-game, 1-0, to new-No. 10 Southern Indiana. The Greyhounds (47-8) earned the No. 2 seed in the Midwest Region, while the victorious Screaming Eagles (43-10) catapulted five spots in the poll and is the region’s No. 1 overall team.

Sunshine State co-regular season champs and No. 2 South Region seed Tampa moved up to No. 6 after a league series win over Rollins.

Central Oklahoma fell to No. 8 after a 1-2 showing at the MIAA tournament and will be the No. 2 seed in the Central Region.

No. 10 Augustana rounds out the top 10. The Vikings (46-7) made an undefeated run through the Northern Sun Intercollegiate College tournament and is the Central Region’s No. 3 seed.

Making a return to the rankings is UAH at No. 24. The Chargers (38-15) rode a 17-game winning streak into the Gulf South title game before falling to AUM. The South Region’s fifth seed will be making its 19th consecutive NCAA tournament, the longest active streak in Division II and the third longest overall streak in Division II history.

The 2022 NCAA Division II Tournament opens May 12 across the country with 16 four-team regionals. Follow the NCAA’s interactive bracket HERE.

The 2022 NFCA Division II Top 25 Poll is voted on by 16 NCAA Division II head coaches with two representing each of the eight NCAA regions. Records reflect games played through May 8.

The final 2022 poll will be announced on Tuesday, June 7.

The 2022 NFCA Division II Top 25 Coaches Poll is voted on by 16 NCAA Division II head coaches with two representing each of the NCAA’s eight regions. Records reflect games played through May 8.