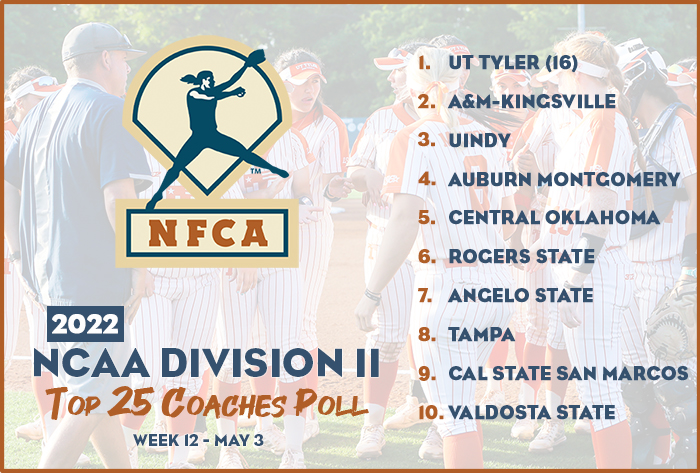 The Patriots (40-4) swept then-No. 20 Texas A&M University-Commerce to capture the title and the top seed for the LSC Tournament. UT Tyler, which posted 6-2 and 4-1 wins over the Lions (39-13), has won 13 straight heading into its first-ever LSC Tournament.

Texas A&M-Kingsville and Indianapolis switched spots at No. 2 and No. 3 as did No. 4 Auburn-Montgomery and No. 5 Central Oklahoma. The Javelinas (43-4) capped off the regular season sweeping Texas A&M University International, while the Greyhounds (45-7) posted a 4-2 mark last week.

The Warhawks (38-8) went 4-0 last week, including a three-game Gulf South Conference (GSC) sweep of Shorter to secure their second straight GSC regular-season title and top seed at the league tournament. The Bronchos (44-8) went 3-1 in MIAA action and finished second in the league standings heading into conference tournament play.

No. 6 Rogers State and No. 7 Angelo State wrapped up regular-season play. The Hillcats (43-9) were swept by Washburn, but rebounded to sweep Fort Hays State and Nebraska-Kearney. The Rambelles (38-9) split with No. 13 Lubbock Christian.

No. 8 Tampa shut down Lynn in Sunshine State Conference (SSC) action and head into the final week of the season tied with RV Rollins (31-8) in the league standings. The two will clash in Tampa for the SSC crown and an automatic NCAA Tournament berth.

The 23rd-ranked Ichabods (42-11) are riding a 22-game win streak heading into the MIAA tournament as the top seed. They capped off the season with wins over Rogers State and Emporia State.

The 2022 NFCA Division II Top 25 Poll is voted on by 16 NCAA Division II head coaches with two representing each of the eight NCAA regions. Records reflect games played through May 1.

The 2022 NFCA Division II Top 25 Coaches Poll is voted on by 16 NCAA Division II head coaches with two representing each of the NCAA’s eight regions. Records reflect games played through May 1.