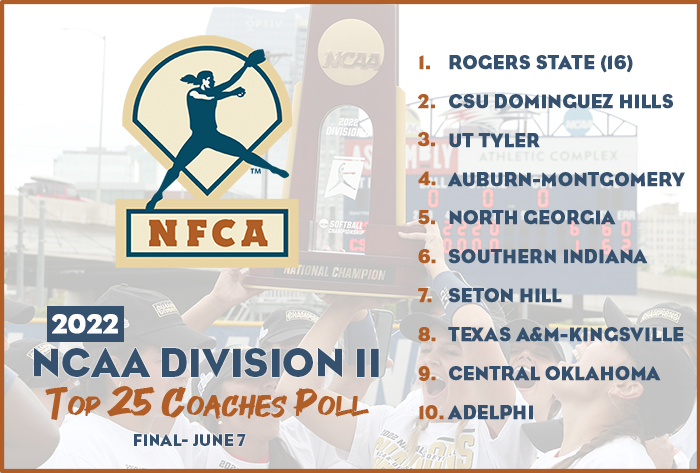 The Hillcats (58-10), under the direction of Andrea Vaughan, entered the NCAA DII National Championship as the No. 5 seed and posted a perfect 5-0 record in Denver, which concluded with a Championship series sweep of Cal State Dominguez Hills.

Rogers State, the Central Region’s No. 1 seed, had to battle its way out of Regionals, winning three elimination games, including two over Minnesota State on the final day, to advance to the Super Regional. Hosting No. 2 seed Central Oklahoma, the Hillcats swept the Bronchos to advance to their first-ever national championship appearance. Along with the series sweep, Rogers State picked up wins over No. 4 Southern Indiana, the aforementioned Toros and No. 1 overall seed UT Tyler. They finished the season shattering the win record (42 in 2008).

National runner-up Cal State Dominguez Hills worked its way through the West Region as the No. 6 seed to reached the program’s first DII National Championship. As the national final’s No. 8 seed, the Toros (45-24) kicked off the tournament with an upset of UT Tyler. After falling to Rogers State, Cal State Dominguez Hills won three elimination games against No. 6 seed Seton Hill and two against seventh-seeded North Georgia in the semifinals. To reach Denver, the Toros captured the West 2 Regional at Concordia Irvine with a 3-1 mark and a 2-1 Super Regional series win over No. 1 West Region seed Cal State San Marcos.

UT Tyler reached the national semifinals in its first appearance as a Division II program at the National Championship. The Patriots (49-9) posted a 2-2 mark in Denver with wins over Southern Indiana and Auburn-Montgomery. UT Tyler won three elimination games during regionals as the South Central’s No. 1 seed and squeaked by Texas A&M-Kingsville in three closely-contested Super Regional games.

Auburn-Montgomery, also making its first Division II National Championship, comes in at No. 4. The Warhawks (49-13) came out of the South Region, winning the regional with a 3-1 mark, which including a winner-take-all victory over UAH. After dropping its Super Regional opener to Valdosta State, AUM rebounded with 3-2 and 2-1 victories. As the No. 3 overall seed, they opened with a win over Seton Hill, but dropped their final two games.

The other national semifinalist North Georgia finishes at No. 5 The NightHawks (49-18) cruised through the Southeast 2 Regional as the No. 3 seed, topping Carson-Newman, host Lenoir-Rhyne and Wingate. They topped Lincoln Memorial in three games to capture the Southeast Super Regional. They reached the national semifinals with triumphs over No. 2 seed Adelphi and AUM before falling twice to national runner-up Cal State Dominguez Hills.

The seventh-ranked Griffins (42-12) advanced to their first DII National Championship, coming out of the Atlantic Region. The region’s No. 3 seed swept through Regionals at Shippensburg, knocking off the hosts as well as Claflin twice and continued on the road sweeping the region’s No. 1 team Kutztown in Super Regionals. The Griffins went 1-2 at the national tournament with a victory over Adelphi.

The 10th-ranked Panthers captured the East Region’s top seed and posted a program record 47 wins (47-15). Adelphi battled back in the East 1 Regional after dropping its first contest to win four elimination games and earned its championship appearance topping Wilmington in three games.

Joining Cal State Dominguez Hills as a team being ranked for the first time in 2022 is East Regional finalist Wilmington at No. 24. Seton makes its return after an earlier season ranking as does Lincoln Memorial, who reached the Southeast Super Regionals and earned a final ranking of No. 23.

The 2022 NFCA Division II Top 25 Poll is voted on by 16 NCAA Division II head coaches with two representing each of the eight NCAA regions. Records reflect games played through May 31.

The 2022 NFCA Division II Top 25 Coaches Poll is voted on by 16 NCAA Division II head coaches with two representing each of the NCAA’s eight regions.