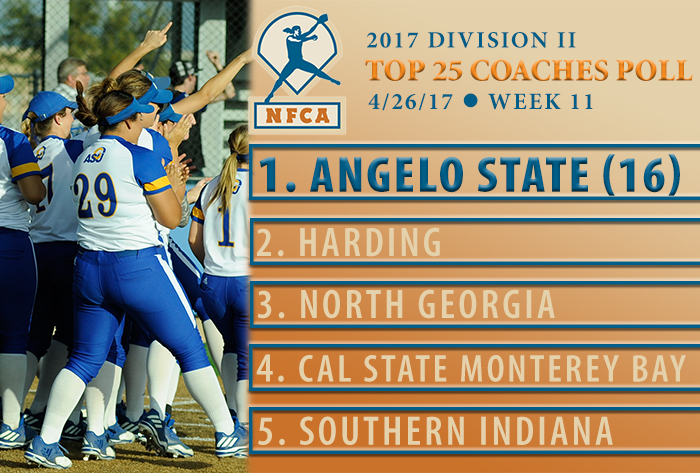 LOUISVILLE, Ky. – A red-hot Angelo State squad was voted the unanimous No. 1 team in this week’s NFCA Division II Top 25 Coaches Poll. Receiving all 16 first-place votes and 400 points, the Rambelles (49-4) have won 14 straight and 45 of their last 48 to earn their second unanimous No. 1 ranking this season.

Remaining at No. 2, Harding improved to 45-5 with a 3-1 week. The Bison split a tightly-contested Great American Conference twinbill against Arkansas Tech with each squad earning 2-1 victories. Over the weekend, Harding swept GAC foe Arkansas Monticello (2-1, 7-5, 3-0) in the first two games of the four-game series.

North Georgia leapfrogged from No. 9 to No. 3 as it claimed the 2017 Peach Belt Conference Tournament championship last weekend. After wrapping up their regular season with a 7-0 win at Montevallo, the Nighthawks (44-10) topped Francis Marion (6-1), Young Harris (5-4) and Flagler (4-0) to win their fourth straight tournament title.

Pfeiffer dropped two spots to No. 6. The Falcons (40-4) won their final four regular season contests to edge out Limestone for its first Conference Carolinas regular season title since 2000. They will open tournament play on Friday, April 28 against Lees-McRae.

West Virginia Wesleyan moved into the No. 8 ranking. The Bobcats (36-6) are riding an 11-game winning streak as they picked up six more wins last week, the final four on the road in Mountain East Conference play.

Humboldt State fell to No. 9 after suffering a 1-3 CCAA series defeat at Sonoma State. Minnesota State entered the top-10 for the first time this season. The 10th-ranked Mavericks (44-6) collected six wins in Northern Sun play to extend their winning streak to 14 games.

University of New Haven makes its first appearance in the top-25 at No. 23, while No. 24 Dixie State returns after a one-week absence.