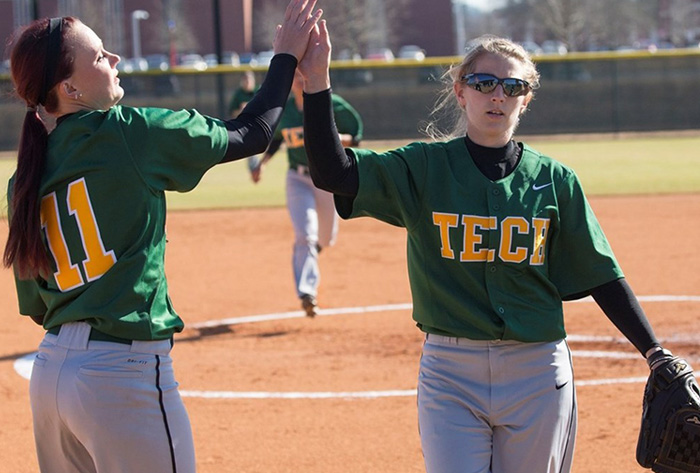 LOUISVILLE, Ky. – West Texas A&M continued its undefeated start as it swept a Lone Star Conference road series from Midwestern State to keep a firm hold on the No. 1 ranking in this week’s NFCA Division II Top 25 Coaches Poll, announced by the Association on Wednesday morning.

The Lady Buffs (24-0), receiving 15 first-place votes and 399 points, opened the four-game set with an 8-0 shutout of the Mustangs. The final three contests were closer as WT held on for 5-2 and 6-3 wins, and used an eighth-inning grand slam off the bat of senior Lacey Taylor to complete the sweep with a 7-3 triumph.

UAH swept a three-game Gulf South Conference series from Christian Brothers in dominating fashion at home. The Chargers (21-3) outscored the Lady Bucs, 38-10, which included a 17-0 blanking in the opener. No. 3 Humboldt State’s four-game CCAA series against No. 23 UC San Diego was cancelled, while the Golden Suns (20-1) marched on with a four-game road sweep of Great American Conference foe Southern Nazarene (6-4, 6-4, 5-0, 7-2). In doing so, Arkansas Tech (pictured) extended its winning streak to 18 games.

The Lions (24-4) trumped then-RV West Florida in a three-game Gulf South series at home with 3-0, 7-3 and 14-5 triumphs. UMSL (16-1) also posted an undefeated trip to the PFX Spring Games going 5-0 and allowing just one run. The Tritons posted four shutouts and outscored their opposition, 26-1.

Making its way into the top-25 for the first time this season is Angelo State  (18-5) at No. 22, while Southern Indiana (11-6) returns after appearing in this year’s preseason poll.