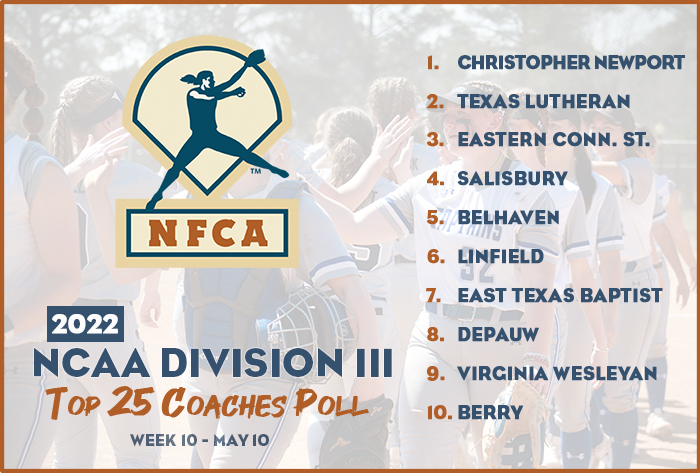 LOUISVILLE, Ky. — Christopher Newport heads into the NCAA tournament as the top team in the NFCA Division III Top 25 Coaches Poll, and the No. 1 squad in the nation for an eighth-straight week.

The (37-1) Captains defeated Salisbury (36-6) in the Coast-to-Coast Athletic Conference championship series and will host Hunter on Friday in their NCAA Regional opener at Captains Park.

Meanwhile, the two losses to Christopher Newport knocked the Sea Gulls down two places to fourth. Salisbury has lost only four times in its last 27 games — all four to the top-ranked Captains.

No. 24 Ohio Northern (24-9) is the poll newcomer, fresh off its second-straight Ohio Athletic Conference tournament title, while Wartburg (27-12) is back in consideration at a tie for 25th with Case Western Reserve after an one-week absence.

There will be one final ranking on June 7, after the NCAA tournament has been completed.