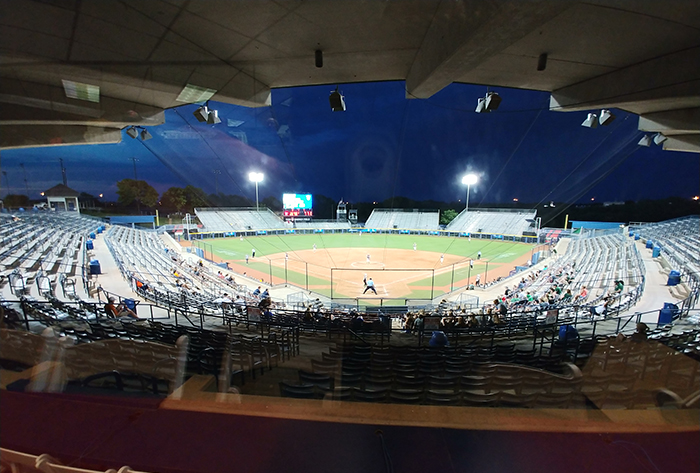 The top-seeded Marlins will face No. 6 seed Illinois Wesleyan in the best-of-three championship finals, starting 2 p.m. ET on Monday. A second game will follow at 4:30 p.m. ET Monday, with a third winner-take-all game, if needed, slated for noon ET Tuesday.

Hull threw 73 of her 115 pitches for strikes, and Kiersten Richardson singled home Julia Sinnett with the only run the (53-2) Marlins would need in the bottom of the fifth. Hull has now fanned 37 batters and allowed just four hits in three starts and 21 innings in Oklahoma City. She has thrown 213 of her 320 pitches (67 percent) for strikes. Hull no-hit Ithaca in the opening game of the eight-team, double-elimination tournament on Thursday.

All-American Sam Berghoff hit a two-run homer in the top of the third and fellow All-American Ally Wiegand tossed a three-hitter to propel the Titans to their first championship finals in school history.

Illinois Wesleyan (39-12-1) tacked on three insurance runs in the seventh — one on Jillian Runyon’s third hit of the game, and two more on Sydney Alery’s double to right center.

In the bottom of the seventh, All-American Ashley Burrows (single) and Blake Banowetz (RBI double) had two of Luther’s three hits in the game off Wiegand, when the (43-11) Norse finally broke through on the scoreboard. Prior to that, Addy Pender had her notched her team’s only hit back in the second.

In the first game between the two teams on Sunday, All-American Anna Strien hit a two-run homer in the third, and the Norse added three more runs in the fifth, to force a second game.