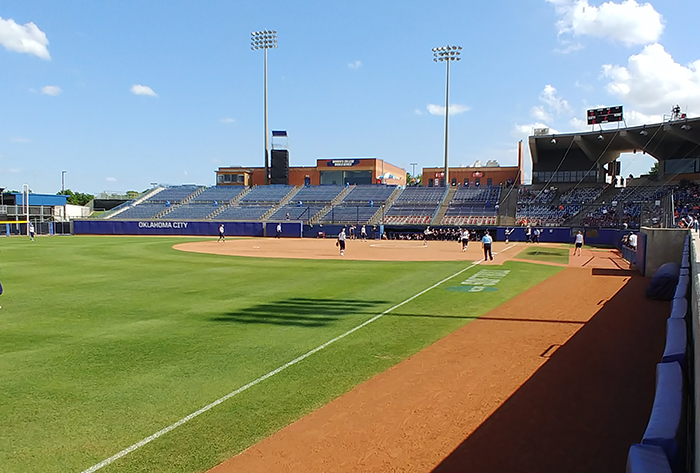 OKLAHOMA CITY — Allie Colleran doubled to left in the bottom of the eighth, as Ithaca College scored a 3-2 come-from-behind victory over Massachusetts Institute of Technology on Friday at Integris Field to stay alive at the NCAA Division III Softball Championship at the USA Softball Hall of Fame Complex.

The (34-12) Bombers shook off being no-hit by Virginia Wesleyan’s All-America pitcher Hanna Hull in their opening game on Thursday, but managed just three hits against MIT in their second game.

The (38-11-1) Engineers’ All-American pitcher Ravenne Nasser retired her first 15 Ithaca batters, before Nikkey Skuraton singled to center to open the sixth. Alex Kimmel was hit by a pitch and was replaced by pinch runner Emily Bloom before Annie Cooney reached on a throwing error, allowing Skuraton to score and Bloom to move to third.

After Cooney stole second, Gabby Laccona singled to left to plate Bloom, but a fly out and two strikeouts ended the threat.

In the eighth, Laccona drew an one-out walk and stole second, before Colleran’s heroics.

MIT jumped on the scoreboard first with two out in the fourth. Sierra Rosenzweig’s single up the middle plated Katherine Shade, who had led off the inning by being hit by a pitch and moved to second on a foul out down the right field line.

In the fifth, the Engineers added a run on Shade’s groundout that scored Amanda Lee, who had started things with a single through the right side, moved to second on an error and advanced to third on a walk.

The Bombers will play 5 p.m. ET Saturday against the loser of the noon winner’s bracket game between Illinois Wesleyan and Texas-Tyler, while MIT was eliminated after its second loss in the double-elimination event.

A pop fly dropped between three fielders in short center field, as Case Western Reserve scored the winning run in the eighth inning to oust Rowan and advance to a 7:30 p.m. elimination game against the loser of Saturday’s 2:30 p.m. matchup between Luther and defending champion Virginia Wesleyan.

Kelly Duffy had homered for the second-straight game for Rowan (39-13-1) in the sixth to tie the game and force extra innings, after the (38-11) Spartans got on the scoreboard first in the bottom of the fifth.

In the fifth, Dusstyn Reynolds doubled to left center and scored on Arisa Cleaveland’s one-out groundout to give Case Western Reserve the short-lived lead.

All-America pitcher Jesse DeDomenico went 3-for-4 at the plate in the loss for the Profs.

The two winner’s bracket matchups were originally slated to also be played on Friday, but, because of an early-morning rainstorm, were moved to Saturday.