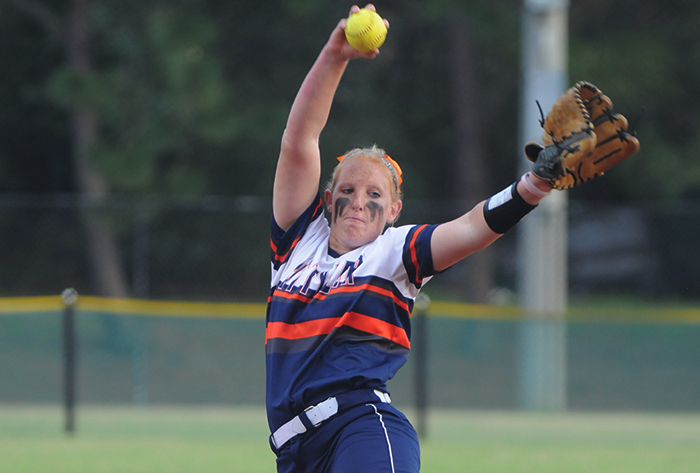 COLUMBUS, Ga. – The first day of the 2016 NFCA Division III Leadoff Classic is in the books and six teams completed the day undefeated. Texas-Tyler, Christopher Newport, Virginia Wesleyan, Texas Lutheran, Lake Forest and Trine all finished 2-0 on the first day at the South Commons Softball Complex.

The No. 1 team in the NFCA poll, Texas Tyler and its stingy pitching staff did not allow a run in a pair of 7-0 triumphs over No. 10 Berry and No. 13 Illinois Wesleyan. In the opener, Kelsie Batten tossed a six-hit shutout with four strikeouts, while Alaina Kissinger was even stingier, surrendering just two base knocks and striking out six. Five-run innings keyed the Patriots’ offense with those coming in the second (Game 1) and sixth (Game 2) innings, respectively.

No. 3 Christopher Newport put nine runs on the scoreboard in each contest to post 9-2 and 9-3 victories over Fontbonne and No. 23 Linfield. The Captains drew 14 walks in the opener against the Griffins, while Tara Heatwole struck out eight and walked just one in a complete-game effort in the circle and Meagan Jones went 3-for-3 with an RBI and three runs scored. In their nightcap, the Captains raced out to a 5-0 lead in the bottom of the first and did not look back. They were paced offensively by a 4-for-4 effort from Sarah Clark and a home run off the bat of Brittney Walters.

Eighth-ranked Virginia Wesleyan scored a pair of 10-1 victories behind an offense that recorded 23 hits and its pitchers (Kandis Kresinske & Mary Shipp) twirling a pair of four-hitters. Sparking the offense was leadoff hitter Courtney Bogan, going 5-for-8 with five runs scored, while Cassetty Howertin, Blake Henderson and Kayla Dost all left the yard for the Marlins.

Texas Lutheran cruised to a 9-0 victory over Western Connecticut State before needing a seventh-inning, two-out rally to defeat No. 17 Central, 5-3. The Bulldogs received a five-hit shutout from Taylor Grissom and were powered by a seven-run fifth to open the tournament. Nicole Snow highlighted the big inning with a game-ending grand slam and finished the five-inning affair 2-for-3 with a double, home run and four RBI. Against the Dutch, the Bulldogs jumped out to a 3-0 lead in the second, only to see Central rally to even the contest in the fifth. However, a pair of two-out walks followed by a clutch two-run double by Jennifer Gallagher in the top of the seventh sealed the win.

Rounding out the 2-0 teams were Lake Forest and Trine. The 23rd-ranked Foresters needed extras and a squeeze play to upend No. 22 Alma, 2-1, in eight innings. They continued with another tightly-contested affair against St. Thomas (Minn.). With the score deadlocked at 1-1 in the sixth, Lake Forest pushed across the winning run thanks to a two-out, go-ahead two-run single by Kat Beall.

After squandering an early 5-0 lead and trailing 6-5, the Thunder quickly regained the advantage to win a thrilling 10-7 game over Eastern Connecticut State in their opener, and later in the evening upset No. 7 East Texas Baptist, 6-1. After spotting the Tigers a 1-0 lead in the first, the Thunder scored six unanswered runs to pick up the victory. Jessica Robles was stellar in the circle, allowing just two hits and striking out eight in the complete-game effort.

Seeding will be on the line tomorrow as each team will play their final pool play games at 10 a.m. and 12:30 p.m. Following the end of those contests, the teams will be seeded and start bracket play at 4:30 p.m. The top eight programs will play at 4:30 p.m. in the first round of the gold bracket, while the second eight will start at 7 p.m. in the silver bracket. The final eight squads will take part in the bronze bracket, which will be split into two games at 4:30 p.m. and two at 7 p.m.

The tournament concludes on Sunday with the first games scheduled to begin at 9 a.m. and the last ones slated for 1 p.m.