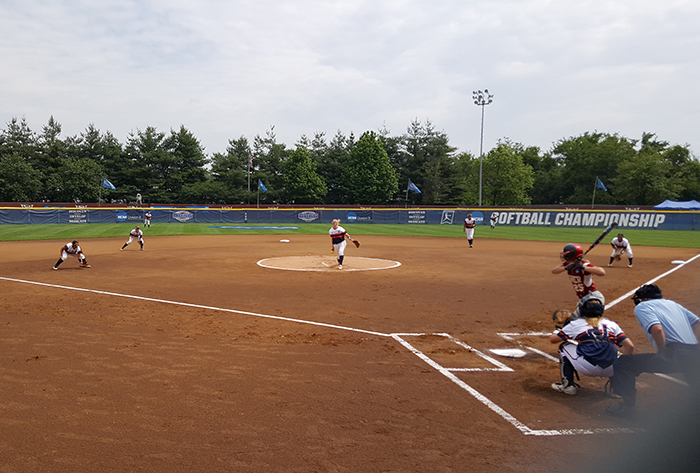 SALEM, Va. — Lexi Ackroyd picked the perfect time for her first home run of the season and only second in 264 career at bats, as 2015 national runner-up Texas-Tyler kicked off the NCAA Division III Finals with a 2-0 victory over St. John Fisher on Wednesday at the James I. Moyer Sports Complex.

Emory, Massachusetts Institute of Technology and Messiah also prevailed on day one of the event.

Ackroyd’s two-run blast in the third proved to be all the offense the (45-4) Patriots needed against first team NFCA All-America pitcher Lindsey Thayer. In all, Texas-Tyler managed just four hits in the contest and struck out nine times.

Brittany File won the second pitcher’s duel of the day, striking out nine in a five-hit shutout of St. Thomas (43-7).

Emory (46-6) manufactured a run in the bottom of the second on singles by Cassie Baca and Sam Vincent, a sacrifice bunt by Ashley Powers and a ground out by Amy Wary.

Powers played a part in the Eagles’ other two runs in the fourth, drilling a long two-run homer to left center that also scored Janelle Turnquest, who had started the inning with a double.

The Tommies made things interesting late, with single runs in the sixth and seventh, but could not get any closer, with File working out of an one-out jam with two runners in scoring position by recording the last of her nine strikeouts and inducing a foul out to end things.

The (34-12) Engineers won their first NCAA Finals contest behind single runs in the final two innings.

Ali Trueworthy drove in the game’s first run in the sixth with a two-out single to score Amanda Lee, who had led off the frame with a double. In the seventh, a throwing error on Jasmin Joseph’s bunt allowed Monica Shifflet to score after she had earlier dropped a single into short left and was sacrificed to second by sister Natalie Shifflet.

Alexandra Marshall (seven hits, six strikeouts) took things from there, fanning two and getting a pop up to escape a bases-loaded jam with no outs in the fourth and then surviving a two-on, no out situation in the fifth.

Danielle Smith collected three hits and Mary Rankin had two in the loss for the (35-12) Titans.

The (45-4) Falcons put together a pair of four-run innings to overcome Rowan’s six-run fourth in the day’s nightcap.

Madelyn Yannetti, Carrie Fix, Brooke Pompeo and Courtney Allen had run-scoring singles in the second and Becky Notte singled home two runs in Messiah’s four-run fourth after the (40-10) Profs had taken a two-run lead in the top of inning on doubles by two-time All-American Shilah Snead and Damariz Mercado.

Yanetti allowed just one hit over the final 3.1 innings in relief of starter Allen to earn the victory, while Allison Nolan took the loss as the second of three pitchers that combined to allow nine hits and five walks in the defeat for Rowan.

Friday’s schedule features MIT versus Messiah (4 p.m. ET) in one winner’s bracket game, while Texas-Tyler and Emory square off in the 6:30 p.m. day two finale.

St. John Fisher, meanwhile, plays in the 11 a.m. opener for the second-straight day, facing St. Thomas in a game both teams need to win to avoid being the first team out of the double-elimination event. Illinois Wesleyan takes on Rowan at 1:30 p.m. in the other loser’s bracket game.