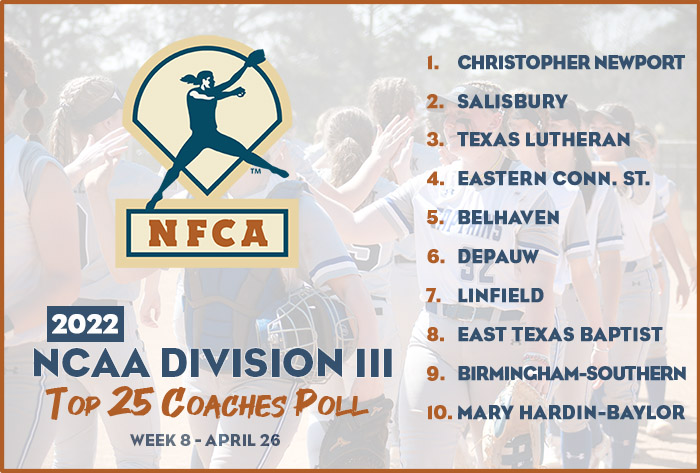 LOUISVILLE, Ky. — The top three in the NFCA Division III Top 25 Coaches Poll remained unchanged for a fifth week, as the only losses for the trio were Salisbury’s two to No. 1 Christopher Newport.

In that twinbill last Wednesday, the top-ranked Captains (35-1) rallied to win the first game against No. 2 Salisbury, 4-2, on a three-run, walk-off homer by Brooke Greaver. They then hit three more homers to take game two, 10-6. Christopher Newport finished its week with a sweep of Meredith on Sunday.

The (32-4) Sea Gulls, who had their 17-game victory streak snapped against the Captains, rebounded on Sunday to sweep Stevenson, while No. 3 Texas Lutheran (35-4) took three games from Trinity over the weekend to extend its win streak to 18.

No. 20 Piedmont and 22nd-ranked Geneseo had been receiving votes, while Old Dominion Athletic Conference tournament top seed Lynchburg is making its 2022 poll debut at No. 24. Pfeiffer is back in the voting mix after dropping out last week.

Dropped out: George Fox and The College of New Jersey.