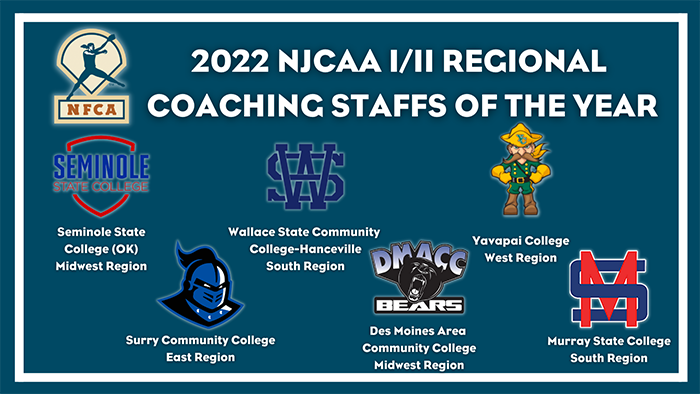 Under the direction of head coach Amber Flores and assistant coach TJ Webb, the Vikings (44-2) captured the Region II softball tournament with a perfect 4-0 mark and earned berth into the NJCAA DI Softball World Series. Flores, who is in her 10th season, was tabbed Region II Coach of the Year for the fourth consecutive season and also guided fourth-ranked Seminole State to an Oklahoma Collegiate Athletic Conference title with a 35-1 mark.

For the second straight season, head coach A.J. Daugherty and his staff has represented the South Region. Daugherty, along with assistant coaches Cadi Oliver and Carson Owens, steered the Lions to a second straight Alabama Community College Conference (ACCC) tournament title, outscoring their opposition 30-1. Wallace State, which held the top spot in the NJCAA DI rankings for four weeks, currently sits at 54-2 and is ranked third heading into the NJCAA DI Softball World Series.

Guided by head coach Doug Eastman and assistant coach Erika Bennett, Yavapai is currently the No. 2 team in NJCAA Division I. The Roughriders (54-4) captured the Region I championship, battling out of the elimination bracket to win the title and earn a trip to the NJCAA Softball DI Softball World Series. Eastman was tabbed Arizona Community College Athletic Conference (ACCAC) Coach of the Year, guiding Yavapai to a 42-2 league record and a ACCAC title.

Head coach Blaine Bullington, along with assistant coaches Joel Jones and Gary Stone, led Surry to a 35-11 overall record,  22-6 mark in conference play and a No. 18 ranking in the most recent NJCAA DII national rankings. Behind the tutelage of Bullington and his staff, the Knights are one of the top offensive teams in NJCAA DII, ranking in the top five in several categories, including second in home runs (48),  extra-base hits (156) and slugging (.593), and third in batting average (.375), doubles (104), total bases (696) and RBI (302).

Head coach Bob Ligouri has steered DMACC to a 50-3 record and a No. 1 ranking in NJCAA DI. Along with the help of assistant coaches Jodi Doty, Bailey Richards, Thana Heller and John Wilkinson, the Bears defeated Central (Neb.) Community College in the North Plains A District Softball Tournament and earned a berth to the NJCAA DII Softball World Series. DMACC is currently riding a 29-game winning streak and has one of the most prolific offenses in the country. The Bears are hitting .443, have launched 100 home runs and outscored their opposition, 620-148.

Murray State College, under the direction of head coach Aaron Mullens, is currently 44-9 overall, 25-2 at home, and ranked No. 7 in the NJCAA DII rankings. Mullens, along with assistants Charlie Crawford and Ashley Hedrick, directed the Aggies to an undefeated run through conference play (16-0) and a 4-0 mark in the Region II tournament. Extending its winning streak to 14 games with the tournament title, Murray State earned a trip to the NJCAA DII Softball World Series.

The NFCA NJCAA Division I & II National Coaching Staffs of the Year will be announced on June 6.