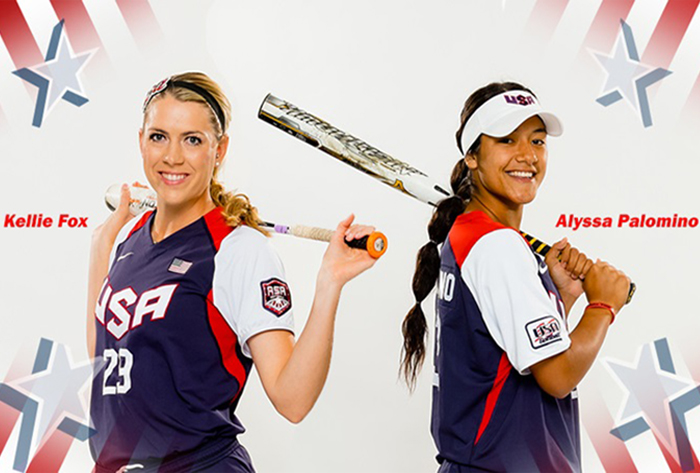 In her second season as a member of the USA Softball Women’s National Team, infielder Fox showed why she’s considered one of the best fielders in the game. The 24-year-old saw action in 14 games as a member of the Red, White and Blue and helped lead Team USA to Gold at the World Cup of Softball X in Irvine, Calif., a Silver at the Toronto Pan American Games and Gold at the Japan Cup in Ogaki, Japan this past summer.

“It is such an honor and privilege to be named the USA Softball Female Athlete of the Year,” said Fox.  “I’m so thankful to be given this honor and to have been able to end my playing career on such a high note while representing my country. I’d like to thank ASA/USA Softball, my coaches, teammates and family for everything they’ve done for me during my career. I’m thankful to have such a great support system.”

The Arizona alum had a breakout year for the Women’s National Team, compiling a .378 (17-for-45) batting average on the year with four home runs, 12 RBI and six runs scored. She compiled an astonishing .711 slugging percentage and a .412 on-base percentage.  Fox also took care of business on defense, recording just two errors in her 14 outings.

“Kelli had a breakout year for us,” said Women’s National Team Head Coach Ken Eriksen (Tampa, Fla.).  “Not only did she break out defensively, but her offense was off the charts.  There was a reason we were successful and it was because of Kelli.”

On the Junior Women’s side, Palomino established herself internationally as a feared slugger during her first year in the National Team Program.  The University of Arizona freshman saw action in every game for the Junior Eagles and played a vital role in the Gold Medal finish for Team USA at the World Baseball Softball Confederation (WBSC) Junior Women’s World Championship (JWWC) in Oklahoma City, Okla.  and a fifth-place finish at the World Cup of Softball X.

“It is such an honor to be named the USA Softball Junior Female Athlete of the Year,” said Palomino.  “The summer this team had was incredible and it was the best experience of my life! I am incredibly grateful for the opportunity that was given to me and I will cherish every memory that was made! Being able to play with USA across my chest is something I have always dreamed of and just being able to play was a dream come true. I would like to thank the ASA/USA Softball staff for this honor and the team and coaches for an amazing summer. Without them, this summer would have never been possible.”

The lefty power-hitter could not be stopped at the WBSC JWWC as Palomino shattered several records en route to a Gold Medal and led the tournament with five home runs, 27 RBI and a 1.333 slugging percentage.  The previous record for most RBI was Team USA’s Stacey Nuveman (La Verne, Calif.) in 1995 with 18. She also tied Nuveman’s 1995 record of five home runs in the Championship.  Palomino ended the 2015 season with a .396 (19-for-48) average, 28 RBI, 18 runs scored and a .483 on-base percentage.

Keep up with Team USA all year long at www.ASAUSASoftball.com

About ASA/USA Softball
Founded in 1933, the Amateur Softball Association (ASA)/USA Softball is the National Governing Body Softball in the United States and a member of the United States Olympic Committee. One of the nation’s largest sports organizations, ASA/USA Softball sanctions competition in every state through a network of 70 local associations and has grown from a few hundred teams in the early days to over 165,000 teams today, representing a membership of more than 2.5 million.  ASA/USA is responsible for training, equipping and promoting the six USA Softball National Teams that compete in international and domestic competitions. The USA Softball Women’s National Team is one of only two women’s sports involved in the Olympic movement to capture three consecutive gold medals at the Olympic Games since 1996. The U.S. women have also won nine World Championship titles as well as claimed eight World Cup of Softball titles. For more information about ASA/USA Softball, please visit http://www.asausasoftball.com